There’s a big difference.  After a couple of half marathons back in the early 90s, I went for my first marathon – Grandma’s Marathon.  Once you move up, it’s hard to go back.  Or is it? 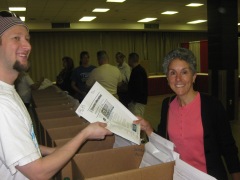 There’s no denying that being a marathon runner carries a certain prestige.  It’s a badge of honor we runners love to wear, and after running 15 of them, I feel I’ve earned that right.  It’s such a thrill to walk into the Expo before the race, surrounded by other marathoners, going up to collect my bib.  The energy exuded by the crowd of runners is palpable, and it’s easy to

get pumped up about the race.  At that moment, everything seems possible.  I just know I can do it, and it’s going to be a good race.  Bring it on!

Arriving for a half marathon, surrounded by marathoners, it’s hard not to feel like a second class citizen.  I can’t help but experience a tug of envy, wishing I were one of them.  It’s not as if running 13.1 miles is something to sneeze at.  It’s just not a marathon.

But it does have its advantages.  Tomorrow I’m running the Garry Bjorklund Half Marathon, not Grandma’s Marathon.  Were I running the full marathon, I know I’d have had a case of nerves all week.  I’m not conscious of worrying, but more often than not I haven’t felt well leading up to the race.  This week?  No problem.  I barely knew the race was coming up.  If I were running the full marathon, I wouldn’t be blogging right now, I’d be obsessing about what clothes to wear, what the weather will be, and how early to get to the starting line.  Tonight  I’m not too concerned – after all, I will only be out there for a couple of hours at most.  I think I’ll bake a batch of chocolate chip cookies instead of fussing.  To run the full marathon, I would have had to devote hours and hours to training, and would have followed my own tried and true training plan to the letter.  My half marathon training was rather haphazard.  How could it be otherwise, when I took a 500 mile bike trip in the middle of it?  No matter.  I know I’ll finish.  It’s just a matter of how fast.  Or how slow I will be.

I expect to just go out and enjoy myself tomorrow.  It will be fun, and I’ll catch the enthusiasm of the runners and spectators.  Going back is a lot easier.  But I won’t kid myself.  I’ll be thinking about returning to the full marathon as soon as I cross the finish line.

1 thought on “Full or Half Marathon?”