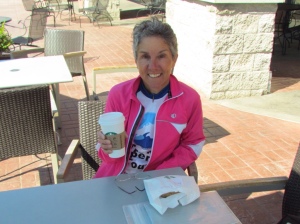 I've been craving a coffee stop. The kind where I can sit over a latte, soak in the sun at an outdoor table and savor an unrushed break. Although the West clearly is serious about its coffee and roadside espresso stands abound as well as coffee houses, they don't always appear at opportune moments in our day's ride. And so I wait.

Today I got my wish, but in a backhanded way. In fact, I'd prefer to have skipped this coffee moment, as it is the result of a bicycle breakdown. While Rich took off in a cab with his bike in the back end, I sit outside a Starbucks watching over the remainder of our gear. And sipping a latte, of course.

All things considered, it was a lucky break. We found a good route out of Spokane which not only avoided traffic but gave us a short but enjoyable run on the Centennial Trail overlooking the Spokane River. With only 40 miles to cover for the day, we could afford a late start and a leisurely pace. Tooling along west of town, we found ourselves surrounded by flat golden fields with the mountains retreating far into the distance behind us. All was going according to plan until suddenly Rich's bike developed a distinct wobble. A quick assessment revealed a spoke that had broken free of the wheel. It wasn't something he could fix, and with no bike shops in our near future, there was little alternative but to retreat. Back to Spokane. Fortunately, we were only about 10 miles out from the populated airport area, where we could set up camp at Starbucks, call bike shops and set about getting a new wheel. 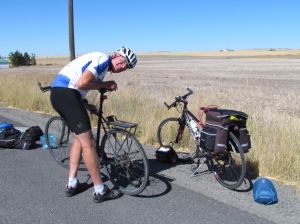 There are a lot worse ways to suffer through a breakdown. We were fortunate to be so close to a major city, with repair shops within reach. And although our arrival will be significantly delayed, we can still make our intended destination. It's just 20 miles farther than we had planned. And even if we don't it won't be a problem. We have no firm commitments at this stage. We just hope we needn't return to Spokane again.