The morning was getting long and our reserves were running short. The light snack we'd eaten before leaving was a faint memory. We knew it would be 31 miles before our first opportunity for a real breakfast and we were anxious to reach that milestone. There were several good climbs to conquer en route, and one of them seemed particularly appropriate.

Despite our cravings, the ride was exceptional. With clear skies we could see forever, particularly the wide vistas that spread out from the hilltops. It was obvious that we were getting closer to the coastal mountain ranges. 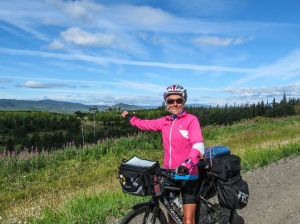 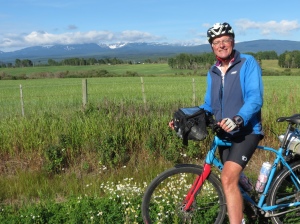 When we reached the small town of Telkwa, the options were iffy. Our target cafe turned out to have a new closing day – that day. The only other choice was a bakery on the far end of town that Google said was closed.

Resigned to cycling another 12 miles for food, we continued on. By this time we expected little from Telkwa. So it was a pleasant surprise to find an attractive town park. It immediately beckoned. Crossing a carefully manicured lawn with flower baskets erupting in a rainbow of blooms, we reached the Bulkley River. Its wide expanse churned as it rippled over rocks and flowed onward toward the mountains. Like most rivers we have seen on this tour, it was light green in color and extremely clear. Rich said that just the sight of that water was rejeuvenating. 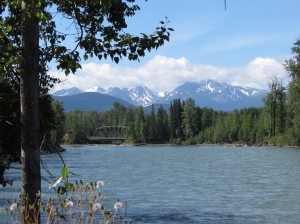 Google's picture of the bakery was a bland building attached to a gas station. Not at all appealing. But Google was wrong on all accounts. Upon approach, not only was the Baeckerei Kaffeehaus a well kept place decked out with flowers, it was open and served meals. Little did we know, the best was yet to come.

The Caribbean proprietor did all the baking himself, and had a menu of imaginative and locally sourced organic dishes. Everything was freshly prepared, and Rich raved about his breakfast sandwiches which oozed hot ingredients on crusty homemade English muffins. My quiche was hot and fluffy with a light flakey crust that melted in my mouth. We also shared an enormous decadent multi-berry muffin. Some meals leave you filled and merely satisfy your hunger. This one fed our souls. It was so unexpected. I'm glad we didn't trust The Google.