Not every day is perfect for taking photos.  And this afternoon certainly did not qualify as spectacular, being cloudy and blasé.  But I decided to head down to Brighton Beach with my camera anyway.  Who knows, perhaps there would be some interesting ice formations I reasoned.

The color was subtle but it was there – blue ice.  Out on the perimeter of the hard packed ice and snow, the lake ice had been pushed up to form an ice bank.  Thin sheets of recently formed ice were piled in haphazard formations.  There wasn’t anything too exceptional about them, except the color.  It was distinctly blue, bordering on aqua.  In the dreary light of the afternoon, it was as good as I was going to get for photo interest.

The blue seemed to modulate with the subtle changes in light through the clouds.  And it made for a nice change from the crusty melting snow turning dingy with spring dirt.  It was a worthwhile trip after all! 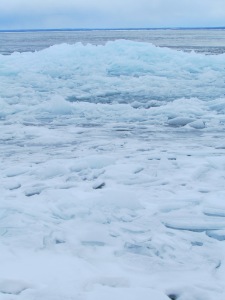