When deer hunting season infringed on our hiking options, our recent trip up the North Shore took on a slightly different flavor.  Since we always have our cameras in tow, we traded miles on the trails for shutter time.  With such great material for shooting photos and plenty of time on our hands, we took the opportunity to play around with various settings and options.  Since I’m still just a novice, it was a great learning tool, and fun to see the results.  Even the pictures that didn’t turn out well were useful for knowing what not to do in the future.

Early in the morning, when I tired of shooting the sunrise, I turned the other way to watch the waves lapping the shoreline.  It was mostly calm, but there were enough good splashes to entice me to try and capture them.  My camera was still set on a long exposure, and I was intrigued by the blur of the water’s motion that flashed briefly across my LCD screen.  It made for rather a fantastical scene.  Resetting the shutter speed, my next goal was the exact opposite, to capture the water droplets.  I still got a bit of blur, but did manage to catch the tall splash in the air. 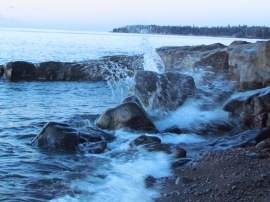 On to the Cascade River.  With my new found techniques, I was eager to test them again.  This time I had roaring water to focus on.  Using shutter speed priority on my camera, when I adjusted from a long exposure to a much shorter one, the camera compensated by changing a whole lot of other things, including aperture value and ISO speed.  I also changed the White Balance.  As a result, in addition to the clarity of the flowing water changing, the scene took on entirely different hues as well.  Hmm, who knew? 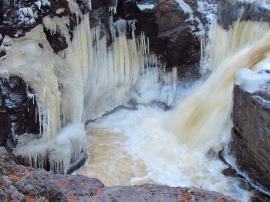 Okay, let’s try this again!  The next target was a tall waterfall further up the river.  Similar to the last results, the camera adjusted all the other settings for the difference in shutter speed.  Only this time the effects were less dramatic.  Interestingly, I tend to feel that the “blurred” picture has more crisp detail in the trees than the stop-action version.  But since I was hand holding the camera, that could have a lot to do with it.

While none of my pictures would be considered stunning or artistically awesome, I felt like I accomplished a lot from my attempts.  And after all, that was the goal.  To play.