I didn’t realize how much I’d missed it.  After three days of constant snowfall and heavy cloud cover, the reappearance of the sun lent a welcome glow to the new fallen snow and rays of visual warmth to my world. 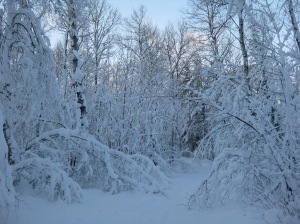 I started snowshoeing in the woods early this morning just past daybreak.  The temperature had dropped during the night, and the trees that were doubled over with the weight of the wet snow were now frozen in their curved poses.  Occasional trees and branches had snapped and fallen under the strain.  Following the trail was like doing an obstacle course.

The snow under my feet started out hard and crunchy.  While it easily bore my weight, progress was noisy. Further inland, the depth increased and the snow softened.  That’s snowshoeing at its best in my mind.  Silent and deep. 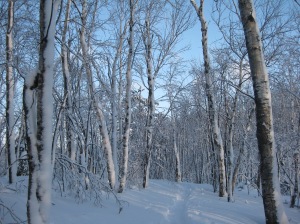 The prettiest trails were those that followed the Lester River.  The ground rose high above the water and my path was narrow and secluded.  The trees must have been more open to the wind, as they all stood tall and proud.

It was at that point that I saw it.  The sun had just risen above the clouds at the horizon and illuminated the trees all around me.  Their long thin shadows lay across the trail, adding a new dimension to the snow.  Re-energized by the sun’s appearance, I prolonged my snowshoe trek to absorb my new surroundings. 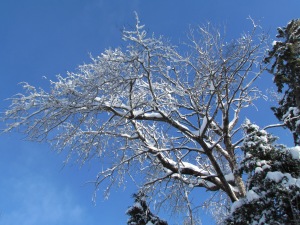 The longer the sun was up, the bluer the sky.  It made a beautiful backdrop for the snow covered tree limbs.  And it lifted my spirits.  After days of isolation and greyness, we had color again.

Ah, sunshine is a wonderful thing.