The sea caves are not the only attraction available this winter due to the ice on Lake Superior.  I recently learned that one could also walk out to see “Uncle Harvey’s Mausoleum” – the listing cement monstrosity that sits in the water just off the Lakewalk at Canal Park. There is nothing attractive about this structure which was built by Harvey Whitney in 1919 as a sand and gravel hopper.  He was hoping to provide the materials for an outer harbor breakwater.  Alas, no such plans materialized and it was abandoned in 1922.  And still it sits, impervious to Lake Superior’s wind and waves.

In summer time the cement edifice does provide a certain tourist attraction.  It has great allure for teenagers wishing to show off their cold-water swimming, climbing and diving prowess.  The result is quite a spectacle for those of us who prefer to remain safely rooted to the shore.  Lithe young bodies seem to show up in all available openings, and manage to clamber up to the tops of the walls, which are open to the sky.  From there they fling themselves into the frigid waters below.

I can’t really claim any urgent need to see inside the building except the fact that it was now possible to do so.  Why not wander out and have a look?  So I did.  Even though the ice was thick, the slush on top made me a tad queasy, and I am certain I looked every bit the old lady as a carefully picked my way across the slippery ice.

The inside turned out to be every bit as ugly as the outside.  Even the ice formations on the foundations did little to enhance its visual appeal.  I could hear children crawling through the cavities of the building, squealing with delight, and envied their greater sense of adventure.  And I still couldn’t figure out how those teenagers scale up to the top.  Some things will remain a mystery. 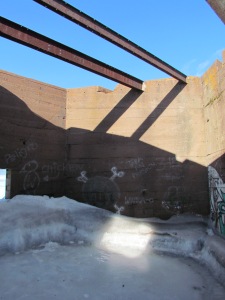 For me the more intriguing aspects were the views I could get through the windows.  From outside, I was able to see across the interior and back out again to the lighthouses at the end of the canal piers.  Lowering myself into the large internal cavity, I could see through the window on the opposite side to the city hillside beyond.  I decided that the building’s best vantage point was as a frame for the more scenic views around it.

It certainly didn’t compare to the amazing sea caves.  But I’ll admit to being drawn to see the attraction.  And I’ve satisfied my curiosity.  Okay, it was a fun little adventure.  Even if it wasn’t attractive.