Despite the amount of time I’ve spent on the North Shore, there there is always something new to discover. This week it was two “new to me” hiking trails. Admittedly I have spent more time cross-country skiing on the area’s trails, so it’s not too surprising that there are still plenty of hiking opportunities to explore. 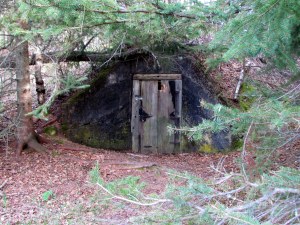 Root cellar once used to store food is the only remaining structure on the land.

The first was Sugarloaf Cove. This 34-acre site was formerly occupied by Consolidated Papers for their pulpwood rafting operation. Back in those days, thousands of logs dropped down a chute into the lake and were collected in a bay until there were enough to form a “raft.” Surrounded by log booms, 6-8 loads were towed across Lake Superior to Wisconsin each summer.

In 1988 the land was acquired by the State of Minnesota with the intent of turning it back to its natural state, and preserving it for future generations. A tasteful nature center was constructed, with green technology to minimize its impact. There is a lovely 1-mile self-guided nature trail through the property. It’s a beautiful trail on its own, including its pebble beach and lake views. But the numbered points of interest along the way also detail the history of the log operation and identify remnants that still remain visible.

The site has only a modest dirt road and little in the way of signage at the entrance, so it’s easy to miss. It’s just four miles southwest of Schroeder and is well worth a visit. 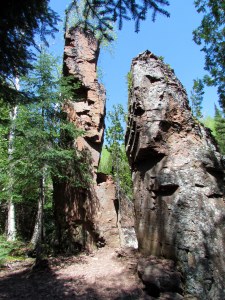 The second was finding the “split rocks” that may have given the Split Rock River its name. Although the exact origin of the name is still in question, the rocks are impressive. The Split Rock River Loop trail departs from the roadside parking area southwest of the lighthouse entrance of the park. Heading inland along the river, the trail follows the Split Rock River. About 1/2 mile in, it joins the Superior Hiking Trail and crosses the river which branches into East and West branches. The trail follows the East or main branch, closely following the water which boasts a continual flow of waterfalls and rapids along its course. With the foliage sporting that new spring green color as it emerged, and small wildflowers dotting the trail side with yellow, white and purple, it was an enchanting hike.

The trail maps weren’t clear about the location of the rocks, so we began to doubt our route as we continued to climb upward over terrain that was crisscrossed with tree roots and at times rocky footing. But suddenly there they were – huge, tall rocks with a split down the middle. And well worth the 2-mile hike to reach them. The view of the river from that spot 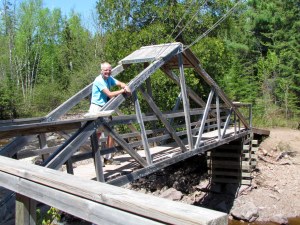 was impressive as well, with high cliffs across the way.

To return, we continued up the river about another 1/2 mile to reach a bridge. It warned us that only one hiker should cross at a time – and we complied. On the other side, the trail proved to be gentler and more smooth underfoot. It was easy walking down, particularly when we veered away from the river. Reaching the Split Rock Shelter, we found ourselves at the top of a large plateau with unlimited views of lake and land.  A short spur trail took us back to the parking lot, for a total of about 5 miles of hiking.

It didn’t hurt that we had beautiful weather for hiking. But even without it, both trails felt like gems. Very different, but great discoveries. And I’m sure the North Shore holds a lot more.