I just don’t have what it takes.  The patience.  The persistence.  The hours of practice, research, testing, trial and error.  Not to mention standing nearly motionless out in the cold.  From watching Rich, I can see just what dedication it requires.  And I am fully prepared to admit that I’m not cut out to be a serious photographer.  But that doesn’t stop me from enjoying taking pictures.

Recently, Rich was hot on the trail of another photography idea.  He’d worked it all out.  The crescent moon would be setting at just the right angle to be seen over the Two Harbors waterfront.  His plan was to photograph the lighthouse at the end of the pier, along with the setting moon.  (Now do you see the extent of his efforts?)  So despite single digit temperatures that promised to fall further in the evening hours, he convinced me to head out with him for this marvelous adventure.

In theory it was a great idea.  Rich’s calculations were accurate.  The only problem was the lighthouse had no spotlight, and hence was invisible.  Part of me wanted to rejoice and head home, as the wind was stronger than we expected and infiltrated my heavy down jacket and warm gloves.  But the photography session was salvaged by an incoming ore boat.

It moved ever so slowly through the black night.  Watching and waiting for the boat to line up with the moon, my fingers reached ever increasing degrees of iciness.  And yet the scene was captivating.  The boat’s lights twinkled over the water, and occasionally big spotlights swept out 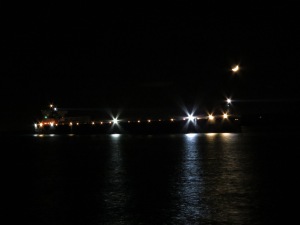 across the liquid expanse as it progressed toward the ore docks.  I was too cold to think very hard about what settings I should be using, or to try different techniques.  That would be too much like the photographer I profess not to be.  But I still snapped away, hoping I was close.  The result requires a bit of imagination to see the boat, but I do rather like the sparkling effect.

Settling into its berth at the 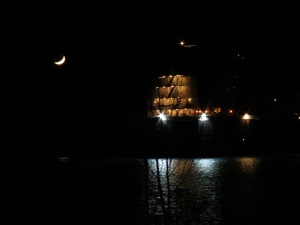 ore docks, the boat’s lighted posterior lined up nicely with the dropping moon.  Without that description, it would probably be unrecognizable.  But I still thought it was picturesque.

That was enough for me.  A beautiful evening.  Chilled to the bone.  A floating spectacle.  Ready for home.  Oh, but wait – another boat was heading our way!  How could we be so lucky?  With the moon nearly down and the ship still a mere speck, it would be a long wait.  Fortunately, even Rich was ready to call it a night.  We took a pass on that one.

No, I’ll never make it as a photographer.  I’ll stick to wrangling with words, thank you.  Writing is my gig.  But that doesn’t stop me from tagging along and snapping a few pix.  Just for fun.