We are fortunate to live in northern Minnesota where we can see the Northern Lights when the conditions are right. Over the years, I’ve seen my share of Auroras. The very best was up at our cabin. Late at night, sitting around the campfire, someone looked up and noticed the green glow. We all trooped down to the dock where we had a view of the whole sky. There were rays shooting up from all directions, reaching the apex and waving.  Lying on our backs to watch the performance was awesome.

More commonly, the lights have been a green glow in the North. Sometimes they create spikes that stretch up into the sky.  Others form curtains that hang above the landscape like the display I saw in the Boundary Waters with my son Carl. Each is mesmerizing and special.

With that as my frame of reference, I was unprepared for the Northern Lights in Norway. Sure, I’d seen photographs and tourism posters, but those are unabashedly sensationalized.  I knew the chance of seeing the lights was better there. Pure geography means even weaker displays are visible.  I just hadn’t realized how different they would be.

Our first night we got really lucky.  In the vernacular of the serious Aurora Hunters, there was a “G2 storm” – which means an extraordinary amount of solar magnetic activity.  That translates to a high likelihood of seeing the Northern Lights.

Not only did the lights blanket the sky, but they were exceptionally brilliant and intense.  We didn’t have to look for a green glow.  The whole sky was glowing.  Against that backdrop bright rays shot across the sky, arcing over our heads and extending from horizon to horizon.  It was as if we were witnessing huge electric currents, pulsating and giving off waves of color.  Everything was perfectly aligned to bring us this fine display – location, clear skies, no moon and solar power in the atmosphere.  And boy, was that obvious.

The following night, we knew that the solar activity was weaker, so we adjusted our expectations accordingly.  I think we were still harboring a Minnesota frame of reference, because once again we were amazed at what we saw.  This time the lights may not have been as intense, but the sharp streaks were replaced by patterns and movement and the performance lasted much longer.  For about an hour and a half we watched as the lights danced overhead.  They were constantly in motion, creating shapes then morphing into something else.  First active on one side of the ski, then picking up momentum on the other.  My favorite was the circular curtain of lights, waving its folds and draping its colors as it curved.  It was hard to know which way to look, because to view in one direction meant missing something behind me. 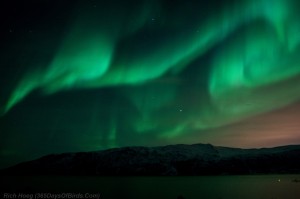 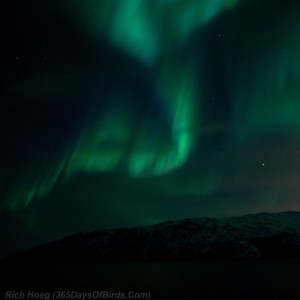 I have Rich to thank for the photographs of these displays, as that is his specialty.  Often times I feel that the camera overstates what I was able to see with my own eyes.  But on this occasion, I think that the opposite is true.  His photos are quite true to what we saw, yet cannot do justice to the whole experience.  Not even his wide angle lens could capture the full image of what was happening up in the sky.  You had to be there to see it.  I can now fully appreciate the vast beauty of just what the Northern Lights can do.  And it is abundantly clear that not all Auroras are equal.  I’m convinced that we saw some of the best.

2 thoughts on “Not all Auroras are Equal”