It’s all out war. A territory dispute between me and a loon. The area in conflict is the patch of water between the reeds in front of our cabin. I claim it’s my swimming hole. The loon insists it’s his fishing ground, and perhaps his young family’s hangout. I have history on my side. Twenty six years of morning swims. He has fright tactics on his. And they are terrifyingly effective.

I’m not sure who was more surprised. Me or the loon. As I turned away from the reeds to swim another lap across the opening, the water suddenly exploded. To my immediate right the loon launched into his ritual warning dance. His eerie cries pierced the air and his displeasure was highly evident. The normally enthralling display took on a whole new perspective at close range. Far too close for comfort. 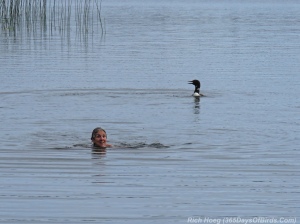 Seeking to quell the nascent fury I quietly turned away, breast stroking back toward the cabin. Attempting invisibility. Looking to put distance between me and the frantic bird. But he wasn’t so easily appeased. While his antics ceased his mission persisted, and he followed me in toward shore while continuing to holler. It wasn’t until I fully conceded defeat, nearly reaching the dock that he relented. Round one to the loon.

His behavior implied a baby loon in proximity. And I assumed my timing was particularly poor. So I thought little of taking a refreshing dip later in the hot afternoon. I will admit to scanning the waters for said loon or his family prior to immersing myself in the lake, but the coast was clear. The only loon in sight was well out in the middle of the lake. My laps proceeded and I regained my confidence only to have it shattered once again. Catching me on the opposite side of the channel, the loon repeated his performance. This time I knew I was a direct target, to have drawn him from such a distance. Forget the breast stroke, I made a hasty front crawl retreat with the loon in hot pursuit. Round two to the loon.

It’s quite a standoff. While I refuse to admit defeat, I confess to curtailing my swimming activities. No sauna for me last night, or swim under the prolific stars. I did boldly reclaim my ground for my morning swim, but only under the watchful eyes of a dock full of family members scanning for loons. As soon as one began motoring it’s way over from a distance, they sounded the alarm. I didn’t hesitate before returning to the safety of the dock. Round three, a draw.

It isn’t over yet. Swimming is my greatest love at the cabin. And I do so love the loons. Just not at the same time. My hope is that by our next visit the baby loons will have a greater range, and they will have moved on from my swimming hole.  I’m not particularly fond of feuding with a loon. 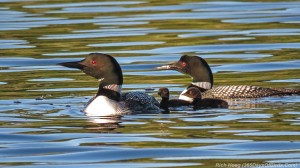 (Click here to visit Rich’s blog for more photos of the loons.)

2 thoughts on “Feuding with a Loon”