I wanted to go up the North Shore.  The leaves were peaking and I had my heart set on cycling alongside the beautiful blue lake in contrast to the brilliant yellows and oranges.  But Rich had other ideas.  My first clue was the slip of paper left on the kitchen counter the night before with cryptic notes that I quickly identified as a bike route.  Just not my route.

The day dawned clear and bright – the perfect fall day for a bike ride.  We left early and

picked up my friend, Myra, and her bike then Rich broke the news I’d feared.  “We’re not going up the shore.  I figured out a better route.”  And sure enough, we headed in the opposite direction.  Myra was more flexible and gracious than I was, but I knew it wasn’t worth fighting – Rich was driving.  So off we went.

We started in Gary New Duluth and immediately headed across the St. Louis River on the Oliver Bridge.  It’s a unique old bridge that wasn’t frightening on a bike, but I might have questioned its soundness in a car.  We were off to a good start.  We traveled on small local roads, and soon turned onto Military Road.  There was no traffic and we were able to ride 3 abreast on the tree-lined route.  The sun was out and soon warmed us as well as infusing the leaves with depth of color.  I guess it was about this time that

I had to admit Rich had made a good choice.  It was a wonderful circle route, which is always preferable to an out-and-back course, we didn’t hit any sections of dirt road, and we got our fill of fall colors, including some very picturesque spots.  Midway Myra and I even convinced Rich to extend the route an additional 10 miles to make it last even longer. 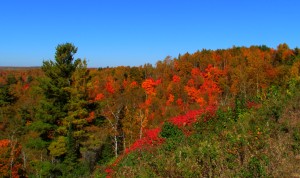 Returning along highway 23 we stopped at the scenic overlook.  Usually it is a sleepy little wayside, but that day it was overflowing with people taking in the view.  And for good reason – the colors were spectacular.  We joined in the fray, taking our share of foliage pictures.

That evening, we met friends for dinner in Duluth.  They called to say that they were going to be late.  They were staying north of Two Harbors and the traffic was terrible…  There were thousands of “leaf peepers” on the road along the North Shore, and they were barely crawling along.  Rich’s face lit up.  He was vindicated, and even I realized that it had been a good idea to avoid the North Shore.

The next day, I just left the choice to Rich.  We were up at the cabin doing fall closing-up chores, but had reserved the afternoon for a bike ride.  He chose our route around Turtle Lake.  As the road narrowed and turned to packed dirt, we had the best colors yet.  The tree branches closed us in overhead with brilliance, and the fallen leaves blanketed the roadside.  Truly spectacular.

In the future I will just have to remember – the road less traveled is the one we want.