I was tired of looking at the two boxes of Raisin Bran that were languishing on the shelf.  I bought them for my son, but he does not appear to be as fond of the cereal as he claimed.  So I dug out an old recipe for refrigerator muffins.  I got it from a co-worker in my very first real job, and that was more than a few years ago.  But I remembered it as being a good one.  The beauty is that it uses a whole box of Raisin Bran cereal and a full quart of buttermilk.  So no leftovers of odd ingredients.  And the batter lasts six weeks in the refrigerator.

I whipped up the recipe, baked a few muffins and stashed the remainder of the batter in the fridge.  Those first muffins were not what I remembered – the bran flakes had not had time to fully soak into the batter and I could discern individual flakes in a white batter.  The next set I baked a few days later, however, were perfect.  Dark brown inside with a hearty flavor.  Good lesson – they improve with time.  The best part was being able to pop a few into the oven early in the morning and Voila! fresh warm muffins.  It worked especially well when we had overnight company.  I could spoil her with home made muffins right out of the oven without the distraction of mixing them up while she was there.  And for several weeks afterwards, I had muffins at will.  I even got that same son to bake up a batch for himself to take to work in his lunches.  Turns out he likes the cereal better in muffins.

If one refrigerator muffin recipe is good, there must be more, right?  Sure enough, a search on the internet turned up numerous variations.  The one that caught my eye was for pumpkin muffins, of course.  It is still a bran muffin, which in my opinion is a good thing – they’re my favorite.  But the addition of pumpkin and fall spices like cinnamon, cloves and allspice make for a tasty muffin.  This one makes a smaller batch, and only lasts two weeks in the refrigerator.  And now I have leftover canned pumpkin and buttermilk.  Maybe that calls for a second batch.  This recipe is from Pillsbury. 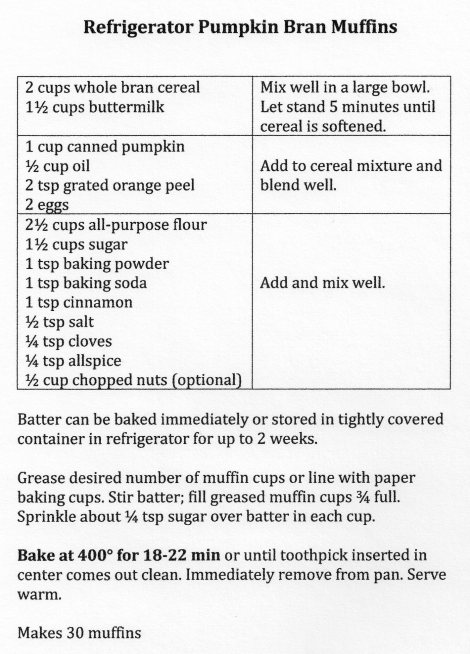 Here are versions of the recipes you can print or save: