The weather gods were certainly shining on us. We awoke this morning to a classic lake effect snowfall that blanketed Duluth, Wisconsin and the UP of Michigan – just what we asked for! We traipsed through several inches of new snow as we loaded the car, and left in the midst of big flakes plummeting down at a rapid pace. Real winter at last, and great start to our XC trip. 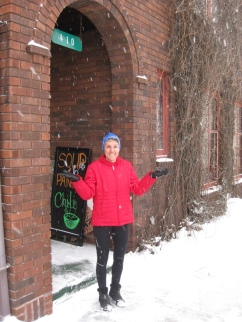 While the fresh snow erased the barren brown ground and covered the icy remnants of old snow crust, it also meant snowy slippery roads for our travels from Duluth to Ironwood. It felt like relearning winter driving again, especially as the snow plows appeared to be waiting for the snow to stop falling before clearing the roads. Lanes were impossible to see, snow billowed all around us each time a car passed by, and I had a sneaky suspicion it was slippery under all that white stuff. But we forged on, safely thankfully.

We made our requisite stop at a charming coffee shop en route, where we planned our day’s skiing over coffee and fresh muffins. The proprietor was an enthusiastic foodie, which delighted Susan no end, and on her lead we detoured to the local coop and bakery for hearty breads and baked goods. They would make a good supplement to our evening meal in front of the fire at the B&B, we reasoned. 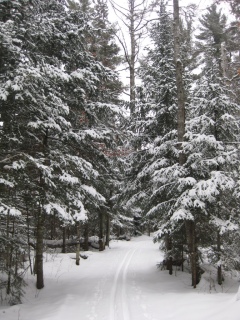 We chose the ABR trails in Ironwood for our day’s ski, figuring they were most likely to be freshly groomed and had plenty of kilometers for us to explore. Groomed they were, but not everywhere. Skate skiers seemed to take precedence, with the classic-only trails yet to be addressed. But we decided that was a benefit, not a hindrance. Some classic trails were skier-tracked, which worked well yet still retained a feeling of remoteness. Classic-only also have the advantage of being narrower, closely lined by trees – our favorite type of trail.

Further out, we found trails that were still untouched. We could see the faint outline of the tracks set before the new snowfall, but they were otherwise blanketed in pristine new snow. It was too good to pass up! We broke trail and skied through the silent woods for several hours on those trails. No matter that it was slow going – this wasn’t about speed, it was about experience, and it was perfect. Even with 3-4″ fresh powder, there was still enough glide to make it easy going and enjoyable.

As each new section of trail beckoned to us, we ventured farther and farther out on the trail system. By the time we neared the trailhead, sunset was long behind us and the light was growing dim. The full parking lot was dotted by only a few remaining cars, and we were tired. But it was a good tired.

Thank you, Lake Superior, for another wonderful day of skiing.