It’s February, and that means race month on our calendar. Each weekend we have a race or ski event scheduled, all leading up to the biggie… the American Birkebeiner. This year our son, Erik, is also joining us. After a 4 year hiatus following his high school Nordic ski team days while attending a college in non-snow territory, he has eagerly returned to the ski trails.

Today we successfully kicked off the race season. The City of Lakes Loppet in Minneapolis was the venue, and the recent cold snap and fresh snowfall made it possible at the last minute to run the races on the full course – hallelujah! The day dawned sunny and cold, just barely above zero, with moderate winds – all in all, a great day for a race.

Rich is a die-hard classic skier, and for this race Erik chose to go head-to-head with Rich in the 25k Classic race. Their race started earlier than mine, so they were off and skiing before I even got to the race venue for my skate race. Which would it be – age and experience, or youth and brawn?

I’m still pretty new to racing. I took up skate skiing about 5 years ago, and I’ve chosen that ski style for racing. I’m not as hard core as the guys, but my own sense of competitiveness comes out even I’m just racing against myself. 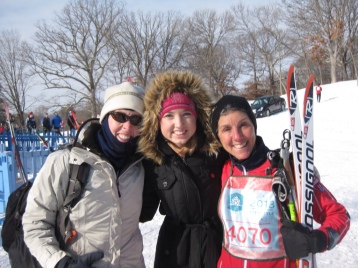 Heading out to the start line, it felt great to be out in the crisp air and the bright sunshine lent a sense of warmth. Suddenly, I was surrounded by Erik’s girlfriend Katie and her mom – they had stayed on after the classic race to see me off! What a thrill, to have my own support team – my spirits were boosted immediately.

Despite the lack of snow this winter, the race organizers did a phenomenal job of preparing a great racecourse. The trails were well covered and I would never have predicted we would have such good conditions – the snow was firm and not at all crusty. It was a slow snow due to the cold temperatures, but I was willing to trade some glide for a nice racecourse.

The race starts out on a golf course, and in the open areas we could see the trail looping head of us, lined with skiers trekking up and zooming down the hills. It wasn’t always comforting looking ahead to see the hills in store. Similar steep grades awaited us in the woods of the nature area, but the beauty of the trees helped distract us from the extra effort required. Once we reached the lakes – for which the City of Lakes in known – it was all flat. Soon we were whizzing around the perimeters near the shore making great time.

This year the finish line moved to a new location, and brought a whole new dimension to the race. We had always skied down a boulevard to the finish line, but this time it was moved to a city street – we skied one whole kilometer down the street then turned onto Hennepin Avenue in the midst a popular section of town. Just before the turn, my fan club reappeared! Katie, her mom and now Erik were there cheering me on with great enthusiasm and volume, carrying me through to the finish. They had stuck around in the cold just waiting for me to finally make my appearance. What a heartwarming ending!

And the results of the races? Youth triumphed as Erik rapidly outpaced Rich in the classic race. And I beat myself, bettering my previous time by 8 minutes.

We’re all psyched for the next race!