It is inevitable.  The hours and days following the American Birkebeiner are filled with conversation about nothing else.  The race is relived from every angle, tales told and retold, anecdotes recounted.  Websites are checked, photos are scrutinized and stats are calculated.

Four of us traveled to the Birkie together – me, my husband Rich, son Erik and our pastor Greg.  It was Erik and Greg’s first Birkie, so Rich and I felt like “old pros” with all of three Birkies under our belt beforehand.  The ride there was filled with anticipation, excitement and some anxiety.  The ride home was filled with talk.  There was no shortage of material.  With over 17 hours on the trail between us, we had plenty to relate, compare and analyze.

Waxes were deemed to be well chosen, although Erik and I regretted our final coat of blue which seemed slow at the beginning of the race.  The temperature was rated excellent for the race, and we were all happy with our chosen layers of clothing.  The deep new snow was a universal complaint.  And of course the hills, hills and more hills – enough said.  Erik literally ran out of fuel and lingered an embarrassingly long time at the final aid station to eat his way to renewed energy.  Greg regretted lugging his own water bottle, which he ceremoniously emptied near the end to lighten his load.  Molly lost a pole early in the race when a fellow skier stepped on it, and had to back up to retrieve it.  Rich captured the full 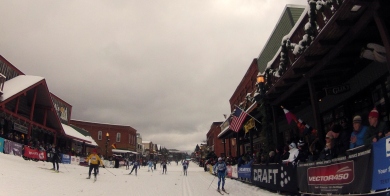 length of the race with the “ski cam” on his back, snapping a photo every 30 seconds to accumulate 700 photos of the action behind him.  This one of the finish on Main Street reflects a sweet moment for all of us.

Of course, the conversation doesn’t stop there.  The inevitable question is, what about next year?  Erik is in.  He is already planning his training regimen.  He’s quite serious about this – he’s meeting with a personal trainer on Tuesday.  Greg says he’d have to have a moment of lunacy to sign up again.  But in the next breath he starts outlining his strategy.  Rich claims this Birkie was his last.  We’ve heard that before – how many marathons did he do after declaring his retirement?  I thought I wanted to take next year off and just enjoy skiing more.  But there’s something about the Birkie that draws one back.  And if I’m going to have to listen to them all talk about it, I might as well be able to enter the conversation.