Sometimes you just have to do what you need to do.  And Halloween was one of those times.  For the last three years we have gone over to our daughter’s house for Halloween to have chili for dinner and go out Trick or Treating with them and their kids.  The first year Ben was only 5 months old, but he had a costume, and we just went to the houses of two neighborhood friends.  But it was still Trick or Treating.

Now that we are in Duluth full time, it’s not like we can hop across the Twin Cities to join in the festivities.  So we thought we’d pass this year.  But as the date loomed closer, I began to get itchy.  Keeping an eye on the calendar as each day passed, I kept pondering the opportunity.  By two days before Halloween, I knew I had to go.  Rich was lukewarm on the idea, but that didn’t deter me.  After all, it was my passion that had been quietly simmering not his.  And there was a certain appeal to making the trip on my own – what better opportunity to squeeze in a shopping trip at the same time?  And I could hang around with the grandkids as long as I liked, operating on my own timeline.

Our daughter Karen was thrilled at the turn-about and we quickly laid plans.  I arrived in time to make some fresh cornbread for the chili dinner and was there to see the kids’ excitement and anticipation of the big night. 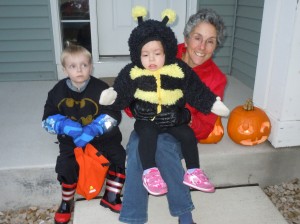 Of course, nothing ever goes quite according to plan.  After days of anticipation and practice Trick or Treating with Mom and Dad, 3-year-old Ben grew anxious when the real event arrived.  He declined to wear any of his previous choices of costume, finally consenting to wear a Batman shirt.  Mya was a bundle of wiggly energy, but at least tolerated her bumble bee outfit.  It was a rocky start, but Ben eventually warmed up to the concept and was soon chasing the other kids from house to house and saying his Trick or Treat’s and Thank You’s as loud as any other kid.  Whew, a happy turnaround. 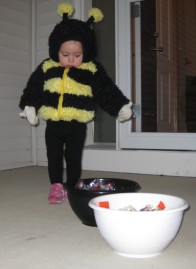 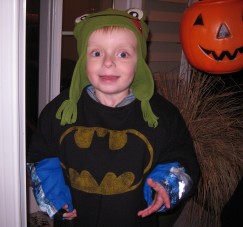 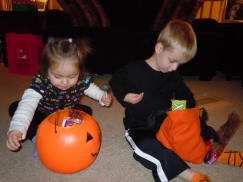 candy, all in bright wrappers.  Ben and Mya were captivated by the activity, although not too distracted to miss sampling the goodies inside.  Being the grandma, I could let Mommy and Daddy be the portion police, and just enjoy the show. 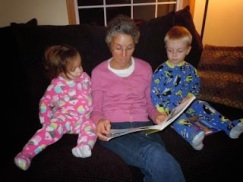 Transitioning from a sugar high to quiet reading for bedtime was accomplished with less fuss than I might have expected. And I can never resist those precious warm bodies pressing close to my sides to take in the story books.

The decision wasn’t really so tricky after all.  I just had to follow my heart.  And I already know where I will be next Halloween.  Trick or Treat!