Many times Susan and I have been snow challenged on our annual XC ski trip. Not this year. Snow was in abundance after about a foot of new snow fell on the North Shore the day before our trip. And more snow continued to fall and accumulate while we were there. Instead of navigating sparsely covered trails, we plowed through new snow still awaiting the arrival of the groomer. Or skied the latest powder into the previous set of tracks.  While it was slow going, and we didn’t cover anywhere near our usual number of kilometers, we put out plenty of effort blazing the trail. And it was so worth it. 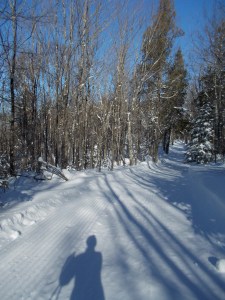 There’s nothing like the silence of new snow. It slid soundlessly under our skis as we plodded along. It glistened in the sunshine, sparkling like closely packed constellations. And it muffled everything around us. Whenever I stopped, there was a total absence of sound. I could tell when a large bird flew overhead, announced by the whoosh of the air as it flapped its wings.

The trees were cloaked in heavy layers of snow. Skiing through deep pine woods was like traveling through a tunnel, with walls of snowy pine boughs. So beautiful. So peaceful. 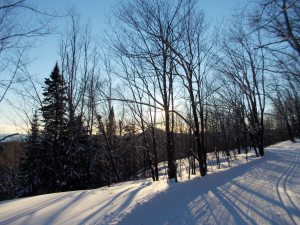 The sky overhead was that deep blue that only comes with cold dry air. It made for a striking background in contrast to the snowy pines and tall willowy deciduous tree limbs.

The sunshine had a palpable warmth that was as noticeable in its absence in the cool shade as it was radiating on our faces when we stopped to soak it up. Late afternoon brought fiery sunsets with a brilliant red glow in the sky.

Yes, it was a good year for snow. And a great year for striding through the woods. 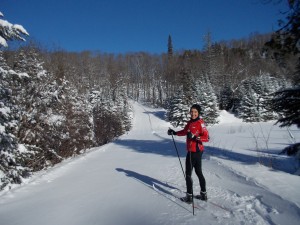 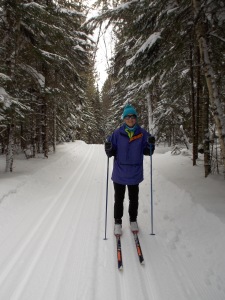