Neither of us would have gone on our own.  And it wouldn’t have been wise.  But when my co-worker and I put our heads together at lunch, we prodded each other into going snowshoeing.  Never mind the wind and blowing snow – we just had to get out and do something.

Hoping to escape the open valley, we drove up to higher ground and the starting point of the snowshoe trail up Nine Mile Mountain.  The wind was still howling, but we convinced ourselves it was better up there, strapped on our snowshoes and set out. 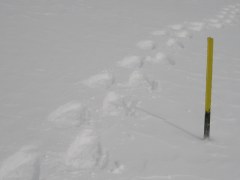 Now many times snowshoe trails are so well traveled that boots are enough, and in fact snowshoes are more of a hindrance than a help.  That was not the case for us.  The mountain was covered in deep fresh snow, with no prior evidence of a trail.  Fortunately, the route was well marked with tree markers when we went through woodsy bits and yellow posts when we were out in the open.  It made me wonder just how tall those posts needed to be to still be showing above the top of the snow.

It was a long slog up, but we were glad for the warmth it generated, and stopped frequently to turn and look at the view.  It was a gray and white world out there, but beautiful in its own way.  And despite the dark clouds, the snow was glaringly white all around us. 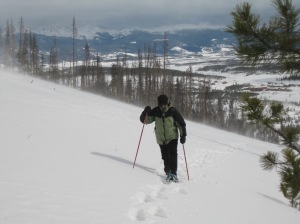 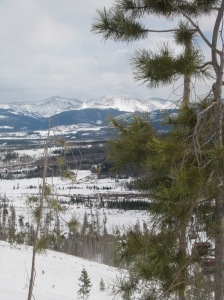 There is something wonderful about snowshoeing.  It’s not the same competitive sport that skiing is – at least for me.  It’s peaceful and quiet, with plenty of time to reflect.  Especially when treading on silent new snow.  We each forged ahead at our own pace, carefully keeping each other in sight and reconnecting after short intervals. 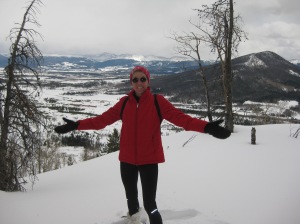 When we reached the top, there was nothing to tell us we’d made it except the absence of additional trail markers.  We had a marvelous view of the valley and the whole campus of Snow Mountain Ranch.  We could see the Winter Park downhill ski slopes off in the distance.  The world was at our feet.

We flew back down the mountain in half the time it took us to reach the top.  It was easier having a recent trail to follow, but even in the short time since we’d traveled 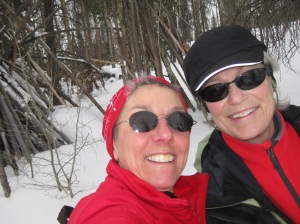 up our footsteps were entirely erased by the wind in spots.

We finished with a sense of accomplishment.  With the brisk wind still fresh on our faces, we were glad we’d made the effort.  Despite the weather, we tackled the mountain.