For the second time this year, we are setting out on a working vacation, retirement style. The deal involves trading volunteer hours for lodging in a unique setting. Last winter we worked at Snow Mountain Ranch in Colorado. This time our destination is Crisp Point Lighthouse in Michigan’s UP near Whitefish Bay. 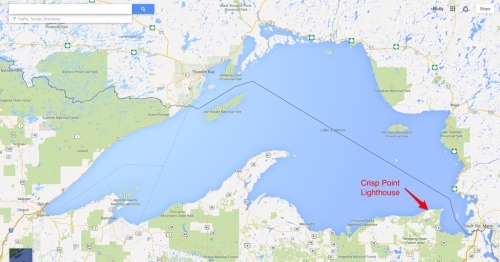 This lighthouse is one of five positioned between Grand Island and Whitefish Point. It’s only a distance of about 50 miles, but Lake Superior claimed numerous ships in this stretch in the 1800s, leading to its moniker as “The Shipwreck Coast.” Pressure to build lighthouses began in the 1850s but it was 1904 before Crisp Point finally received funding and became operational. It remained in service until 1993. After nearly falling into disrepair with Lake Superior encroaching on its shoreline and lapping at its base, the lighthouse was saved by some enterprising folks who ultimately founded the Crisp Point Light Historical Society. That group has done extensive restoration and preservation work, ensuring the survival of the lighthouse for future generations to enjoy. 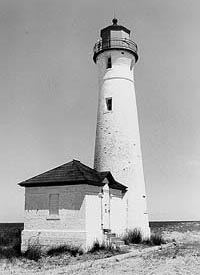 Crisp Point Lighthouse is said to be a beauty. Its remoteness enhances the appeal of the site, with Lake Superior’s unspoiled shoreline providing a dramatic backdrop. Only the lighthouse remains of the multiple buildings that comprised the orginal complex. The attached service building was recently rebuilt, and a new visitor center resembles the old fog signal structure.

Our gig is to man the visitor center and keep the buildings and grounds clean. We are expected to greet visitors and open the tower and gift shop from 10-5. Our instructions tell us we must “maintain the high standards of friendliness, neatness and cleanliness” in carrying out our duties. Just how many guests we will entertain is uncertain. Given that the lighthouse is located at the end of an 18-mile dirt road in an already sparsely populated area, it is not a sight to attract casual tourists. But the true lighthouse affectionados will find their way there.

Our accomodations on site will be a rustic campsite perched on the edge of Lake Superior. Devoid of running water, electricity and other amenities including cell reception, we will have to be self-sufficient for our 5-day stint. While it’s not required to stay overnight on the lighthouse grounds, to us that is the whole appeal. We even upsized to a 3-man pup tent for more elbow room, a luxury of car camping. Having our own slice of Lake Superior shoreline, sitting by a crackling campfire, reveling in the super dark night skies and the ever-hopeful possibility of Northern Lights are the draw for us.

We should arrive at Crisp Point tomorrow morning about 8:00, in time to talk to the volunteers who are preceding us and get some pointers before assuming our duties at 10am. After that we will be out there on our own with little connection to the outside world, just like lighthouse keepers of old. Check back with us in about a week to see if we find ourselves fit for the job.