This post was inevitable.  There is only so long I can be a good sport about the lack of warmth and sunshine on this side of Lake Superior before I too succumb to whining about it.  I think my outdoor thermometer is permanently stuck on 46 degrees.  That’s what it says every morning.  Without fail.  And we’re lucky if it climbs past the mid-50s during the day.  Sigh.  We love you, Lake Superior, but even now that the ice has melted your frigid waters continue to have an ice box effect on what used to be summer.

I may have to stop listening to Minnesota Public Radio.  The weather forecasts are just too depressing.  I begin to get hopeful when I hear the temperatures climbing into the 70s and 80s, only to have my hopes dashed when the inevitable “cooler by the lake” phrase creeps in.

Not only is Lake Superior thwarting our attempt at summer, it has disappeared.  The cold water continually spawns thick fog which blankets the lake and creeps into town, rendering Lake Superior invisible even when standing on the shore.  Our recent cyclist guests were convinced the lake was a myth – after all, they couldn’t see it.  Duluth was no more appealing to them than any other Midwestern town.

Fortunately, we have an escape.  Our cabin Up North.  Despite being closer to the Canadian border, the secret is that it is inland, 100 miles away from Lake Superior.  Far from the reaches of that cold, cold water.

When we lived in the Twin Cities, I always thought there was something backwards about going to a cabin where the weather was always cooler than home.  Spending time on the lake was wonderful, and it was the best retreat ever, but it was always on the chilly side.  Now that we have moved to Duluth, it appears that nature has righted itself.  A trip to the cabin now means summer and warm weather.  Thankfully.  I can’t wait to get there for our annual 4th of July week with the family – for many reasons, weather included. 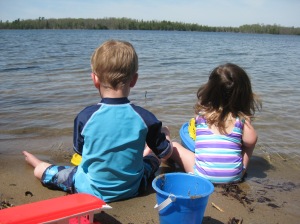 We had a wonderful time there over Memorial Day.  It was hot and sunny, and we played with the grandkids in the water on the beach.  It really felt like summer, including the nights that were too warm to allow a good night’s sleep, even with fans.  The only blemish on that weekend were the plumbing problems we encountered.  Lest you think this is an unrelated side track, wait until you hear the cause.  Just yesterday, June 26, we hired a plumber to come out to fix the problem.  Which he did.  By thawing the ice that was plugging the pipes underground!

It’s no wonder I fear that summer is going to pass us by this year.