There is something irresistible about berries.  Especially those growing of their own free will, just steps from our doorway.  Begging to be picked.

We’ve seen the thickets of thimble berries growing in “our woods” every summer.  And each year the birds, critters and perhaps other berry lovers have gotten to them first.  This year appears to be a bumper crop.  Loads of big red berries hang from the branches, with many more promising to follow.  We promised ourselves that this year we’d pick them and make jam.

Thimble berries take me way back.  Julie, one of my best friends in school, went blueberry picking each year with her family, and I went along.  Not being a real lover of blueberries at the time, I was lured away by the sight of huge red raspberries not far away – something I truly adored.  I picked and picked and returned to the others quite smug and victorious.  That is until I was informed that I had picked thimble berries, not raspberries.  I’d never even heard of them before.  I quickly learned that they were not so tasty for eating.  But to make up for it, Julie’s mom turned my cache of non-raspberries into a delicious jam.

A few days ago it became clear that the time was NOW.  At least for the first round of picking.  Each bush had one or more perfectly ripe berries.  So Rich and I ventured out to see what we could gather.  Although it meant only a berry here and a berry there, the bushes were plentiful enough to make it a worthwhile hunt.  Moving across the road, we reaped even more berries – enough to come up with 4 1/2 cups between us.  And judging by the remaining unripe berries, we could easily duplicate that several times if we keep diligent watch. 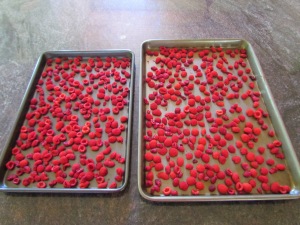 I had to hunt down a recipe for jam, and was surprised just how simple it was.  Only two ingredients in equal quantities – thimble berries and sugar.  It also warned that cleaning the berries was as time consuming as picking them.  I won’t argue that point.  And picking was a lot more fun.

I dug out my canning supplies, bought more canning jars and

reacquainted myself with the process.  Then I dug in.  (Notice “we” became “I” at this point…)  Soon the house was redolent with sweet berry smell as the mixture simmered on the stove.  It wasn’t long before it began to thicken and resemble jam, and filled more jars than I expected.

Somehow getting something that good from free fruit is deeply gratifying.  Now I suppose I’ll be expected to share it.  And why not – there’s more where that came from.