It was bitterly cold.  The wind was so fierce that I had to stop and blow warm air into my mittens cupped over my face to revitalize my nose every few miles.  But still I persisted.  Very little keeps me from my morning run. 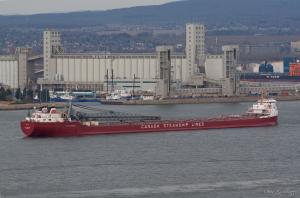 The CSL Tadoussac – photo by Steve Geronazzo, courtesy of Shipfinder.co

My destination was Lief Erickson Park via the Lakewalk.  Passing under London Road next to the railroad tracks, I reached the lake shore for the first time.  As always, when I see a boat out in the lake, my heart does a little flip and I am grateful for living next to the wonderful body of water we call Lake Superior.  Seeing an old style ore boat is even better, connecting me back to the days when all boats had such graceful lines and majesty.  So seeing the CSL Tadoussac heading out into the lake was distraction enough to help me forget the wind and cold.  I had something much more appealing to focus on.

But then things got really interesting.  The boat began to turn toward shore.  Running to the next open view point, I stopped to watch.  Before long it had done a complete 180 and was heading back to port.  Why would a boat come out of the harbor only to change its mind and return a short distance later?  It didn’t appear to be having any trouble as it steamed back toward the bridge.  Continuing on my run, I followed its progress, and sure enough before long the bridge lifted for the incoming boat.  I didn’t actually see the boat go under the bridge, as by then I had turned around myself.   But I did hear the boat and bridge salute each other as it slipped under the raised bridge deck.

The whole episode might have remained a mystery to me, but this is where it helps to be connected.  As soon as I contacted Konnie at Lake Superior Magazine, she was on the case.  She in turn went to her shipping experts who not only solved the puzzle, but provided a visual explanation. 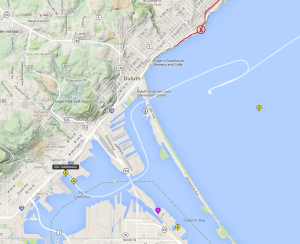 The CSL Tadoussac’s route, from Shipfinder.co, and my route – I’m the red X watching the boat turn

Shipfinder.co tracks ship movements worldwide, and by zeroing in on the port of Duluth, it is possible to view the exact movements of any recent vessel.  As soon as the Tadoussac’s route displayed, the answer became clear.  She hadn’t come out from the harbor at all – that was just my own mistaken assumption.  Instead, she had been anchored outside the harbor awaiting her turn at a dock.  When her turn came, she must have needed more room to maneuver to get a good point for entering the narrow ship canal, so headed down the lake before doing her U-turn and pointing toward the bridge.

I really should have thought of that.  After all, I just wrote a story for Lake Superior Magazine about boats using the “free parking” outside the harbor!  But logic doesn’t always flow through the cold brain of a runner.  It seemed far more exciting to consider the dire consequences of the ore boat that appeared to change its mind.  And yet, I’m glad there was a simple explanation.  We both had a good run this morning, me and the Tadoussac.