What to show out of town guests?  That’s not hard when we live in such a beautiful area.  With visitors here this week, it was an easy choice to drive up the North Shore and share a few of our wonderful state parks with them.

When we planned this visit, we assumed we would be walking the trails at Split Rock Lighthouse State Park in crisp fall weather with leaves underfoot.  Winter’s early arrival changed the context but did not deter us from our plan.  We just needed boots and a few more layers of clothes.  There were few other visitors in the park and we enjoyed exploring the lakeside trails with their view of the lighthouse.  Snow was everywhere, and it was tricky walking on the pebble beach.  Some rocks were frozen together in clumps, others harbored hidden ice, the rest were loose, creating rickety footing.  As much as I love the shoreline, I was relieved to return to the trail.

With plenty of pictures of Split Rock in my albums, I searched for other sights of interest. It wasn’t long before I became fascinated with the shapes and patterns created by nature all around me.  Soon I found plenty of images to capture.

Moving on to Gooseberry Falls State Park, we found frozen waterfalls.  I never guessed that the falls would be encrusted in a frosty facade by November 19!  We could hear the water moving under the ice formations, and enjoyed the drippy icicles left on the surface.  Once again, I found plenty of material for my study of nature’s details. 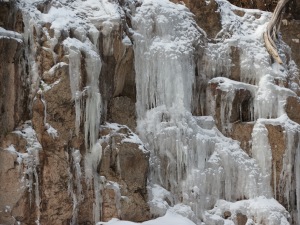 Our final stop was back in Duluth.  We arrived at Canal Park in time to see the Walter J McCarthy Jr slip through the piers and under the bridge.  Evidence of its trip through the frigid lake was plain to see, with its ice encrusted bow.  Mother Nature’s study in white. 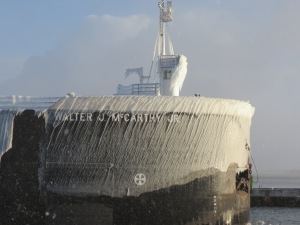 No matter how many times I visit the North Shore, there is always more to see and enjoy.  This time it was a matter of looking more closely instead of viewing the big picture.  That’s where I found nature’s imagery, in ice and snow.