I’m a meticulous planner.  No one would deny it.  My self-styled training program for a marathon includes rigorous standards that usually involve at least 16 weeks of preparation, doing 50+ miles a week and at least 3 long runs of 20 miles or more.  When I step up to the start line I am driven to feel prepared.

Not so this 2015 Minneapolis Marathon.  My training was unconventional at best, and admittedly quirky:

I have to say that this plan made for a much more relaxed approach to marathon day.  I still went through the ritual consternation about the right layers to wear for the weather.  But I had no illusions about setting a PR.  I wasn’t concerned with getting just the right position in the starting chute.  I even planned to stop at the porta potties along the way.  All I wanted to do was finish.  Ok, with a reasonable time. 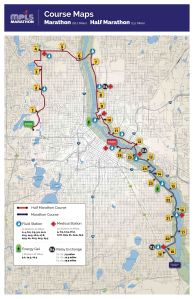 We couldn’t have had a more beautiful day, with brilliant sunshine enhanced by the spring green leaves and early flowers blooming.  It was chilly waiting at the start in the 45 degree morning air.  My legs felt like lead the first few miles, but once warmed up they began to pump as they should.  Yes, I could feel it – this was going to be a good race.

The course was very scenic, mostly following the Mississippi River.  But best of all, it was extremely spectator friendly and my family made the most of it.  Rich, Erik and Katie met me on their bicycles at mile 7 and leapfrogged me for most of the course.  Karen, Matt 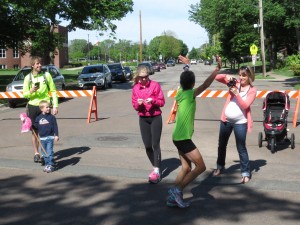 and their kids met me at multiple places on the course.  While I usually do not favor out-and-back routes, having the second half of the race do so allowed for double the cheering opportunities.  Their support was the key ingredient in my race – having them there buoyed my spirits and energy immensely.

The biggest surprise was a huge group of people I didn’t recognize – all chanting my name!  I was mystified until my daughter later explained that they were her running group, who she tipped off before the marathon. 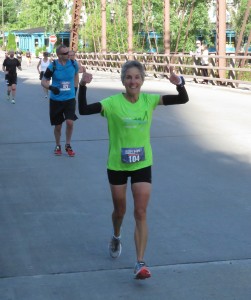 amazingly strong most of the way.  Finding temporary running buddies is always a boost for me, talking and running.  Sharing marathon stories and other irrelevant bits of information while being pushed by someone else makes the miles pass by more quickly – in more ways than one.  I went through several such pals.  It was miles 17-21 that were the toughest for me, as I passed the distance of my longest training run and felt the accumulation of miles behind me.  But a final burst of family cheers and high-5s re-energized me and I pushed into the final stretch.  I managed to attack one of the steepest hills near the end by pretending I was XC skiing (there’s that cross-training!) and trading jibes with my family cyclists about having just the right wax for the job.  Erik challenged me to “give it all I had” with less than a mile to go.  It was just what I needed, propelling me at my top speed (well, the top I had by that point) right through the finish line.  What a triumphant finish! 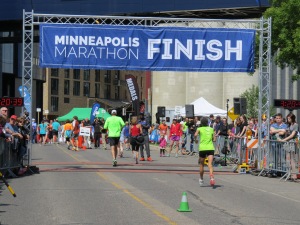 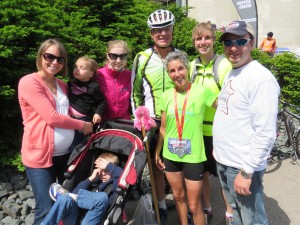 I optimistically hoped to average 10 minute miles for the race, so I was thrilled with my 4:19:35 finish time, with a 9:55 min/mile pace.  I had no idea I could do that on just 3 weeks of training.  Just think of all the time and pain I saved myself – multiple 20 mile runs, weeks of anxiety over getting in enough miles and months of planning for the race.  It’s close to my slowest marathon ever, but hey – I even qualified for Boston!  Maybe my shortcut method to 26.2 is not so bad…

1 thought on “Shortcut to a Marathon”