My time on Madeline Island is coming to an end. I've had a terrific week at the Madeline Island School of the Arts, taking a writing class from Catherine Watson. But it hasn't been all work and no play. I brought my bike along, and have used it to expore the island in the afternoons. After doing a lot of sitting in class, it has felt great to get out and move, and to enjoy some fresh air. 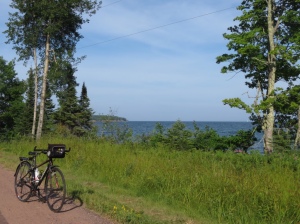 Madeline Island isn't very big. Fourteen miles long and three miles wide, with roads mainly around the perimeter. The good news is that the roads are all bicycle friendly, with bike lanes on the main road and little traffic anywhere. Unfortuntately, even when near the coast the lake views are mostly limited to sneaking peaks through the trees. The one stretch that has a good vista happened to be near my home base, so I passed it often and it became a favorite.

My first exploration led me to Big Bay State Park. There are some great rock formations that can be seen along the shoreline on Big Bay Point, accessible from a short path from the parking lot.

La Pointe is the only town on the island, populated with art galleries, craft shops and some good restaurants. I took in the Art Walk one evening with some fellow writing students and enjoyed browsing the local artists' offerings, followed by dinner overlooking the lake. Going for an early morning bike ride, the ferry harbor and marina were particularly pretty in the low sun.

I had grand designs to circle the entire island on my bike, but discovered that two long road were dirt. Worse yet, they had been freshly graded, making them difficult to traverse. It was rather slow going. I planned an out and back route to the opposite end of the island instead. Stopping in Big Bay Town Park, and spent time on the beach at the opposite end of the bay from the State Park. A long boardwalk paralleled the beach, and although I didn't have time to cover the distance, it appeared that there was a trail all the way back to Big Bay Point. Instead, I hung out on the beach for a while, watching the waves roll in. 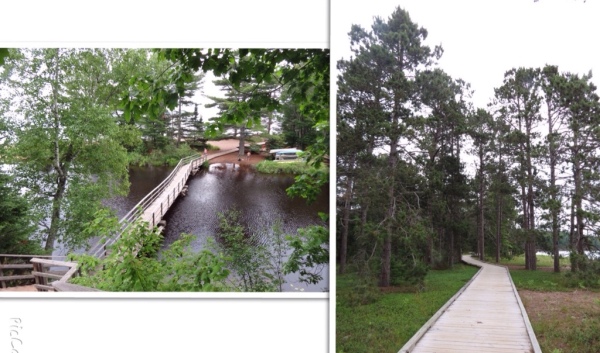 By now I feel like I've covered all the important points on the island, just in time to head home. And I've made good use of my exploration time as well. I get a lot of thinking time when I'm cycling, which I've used to come up with topics for my assignments, and have just the right word I'd been seeking pop into my head for an essay. So it's been a good mix of work and play this week.

1 thought on “Work and Play do Mix”