Weddings, funerals and the birth of a baby. In my limited experience, those three life-changing events stop the world. While life goes on, news events happen and the clock ticks forward, for those closely involved all that ceases to exist. Only the event at hand matters.

That certainly was the case for me this weekend during the wedding of our son, Carl, and his new bride, Chelsea. From the moment we arrived at our hotel until our trip home, I happily surrendered email, board responsibilities, writing assignments, coffee dates and my to-do list. All that mattered was on the detailed schedule developed by Carl and Chelsea – my life was theirs for three plus days. And it was a wonderful ride.

It was easy and exciting to get pulled into the final preparations for the outdoor reception to be held on the lawn of Chelsea’s family’s farm. Despite being kept in the loop as plans progressed, nothing could have prepared me for arriving two days before the wedding to see the final production in full swing. Everything was carefully staged in Chelsea’s parents’ expansive great room, with

armies of friends and family pitching in to put it all in place. The large white tent stood majestically in the expansive manicured yard, surrounded by trees, a wall of cornstalks and large shed lined with sunflowers. The dance floor was under construction, tall tables were being moved into place for the social hour, and large scale photos from parents’ and grandparents’ weddings were being mounted on trees. Flowers had just been cut from the garden where they had been planted specifically to grace the dining tables. Boxes containing the lace tablecloths, unique china plates and hand-made napkins were labeled for distributing to each table. And the pièce de résistance, 15 red vintage tractors carefully restored by Chelsea’s grandfather stood as lawn ornaments among the trees. It was magic in the making.

Events began in earnest with the rehearsal. Having met at Wartburg College nearly ten years ago, it was entirely fitting that Carl and Chelsea chose the college chapel for their wedding ceremony. Dinner was in the “Castle Room” of the college, a warm wood paneled room reserved for special events where we shared a memorable meal with those closest to Carl and Chelsea.

With a perfect weather forecast, the wedding day went off without a hitch (well, if you don’t count best man Erik’s missing pants – but even that ended well). The chapel quickly filled with family and friends and the moment we’d all been awaiting finally arrived. From my front pew, I could clearly see Carl’s eyes fill with tears as Chelsea entered the back of the chapel with her father. His emotion triggered mine, and I’m sure many others as we witnessed the love of this young couple as they came together to be joined as man and wife. From there flowed a ve

ry personal and meaningful ceremony performed by Pastor Steve, a long-term friend of Chelsea’s family.  It was gratifying to see our entire family involved with Erik as best man, Karen and Matt singing, Katie as an usher, and Ben and Mya as Ring Bearer and Flower Girl.

By the time we arrived at the reception, the Iowa heat had broken for the day and in the 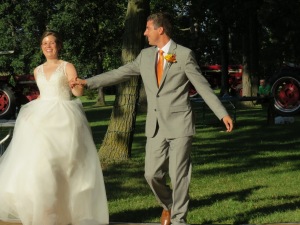 shade of the trees and tent it was delightful. Guests filled the lawn and mingled as they explored every detail of that special venue. Snacks were artfully arrayed, wine and beer were flowing, lawn games could be played.  It wasn’t long before the wedding party exited their party bus, following the requisite stop at Dairy Queen (a Hoeg tradition…), ready to celebrate.

All the important elements flowed flawlessly – the Iowa barbecue dinner, the toasts, the couple’s first dance, cutting the wedding cake and special Twin’s hat groom’s cake.  In the warmth of the evening air it could not have been more perfect.  And yet, there was one more detail to be revealed.  A secret planned by Chelsea’s parents a

nd not revealed to a single sole, including the wedding couple.

The band announced they were taking a break, and asked guests to clear the dance floor.  Just moments later, the first burst of color exploded over the cornfields.  It was followed by additional pops and flashes as an extraordinary display of fireworks proceeded.  We

were treated to ten minutes of non-stop sparkle as the night sky lit up with continuous tributes for this special occasion.  It gave me goosebumps just standing there as the brilliant illuminations reflected off the faces of Carl and Chelsea and the assembly of guests.

The whole weekend was memorable.  Snapshots of time, faces and emotions will remain with me forever.  Now that I’m back home, I’m having trouble picking up the pieces of “life as usual” and resuming my normal routine.  I’m still basking in the joy of the moments of that wedding cocoon, when all else paused for Carl and Chelsea’s marriage.

1 thought on “The Wedding Cocoon”