There I was, all on my own at Durham University in northern England. The year was 1975 and I was studying abroad on a program through the Institute of European Studies. It was a thrill to call that beautiful old cathedral city home, walking among age-old buildings, the castle and along the banks of the River Wear as a matter of course.

I loved the opportunity to lose my American self among the British and to immerse myself in their culture. As one of only 40 Americans in a sea of 4,000 students it was easy to do. I joined student clubs that offered experiences that were uniquely British. Soon I found myself in a church belfry doing “change ringing” on huge bells high over my head. I scaled rock faces with the mountaineering club, and went “walking” in the Lake District. I even rowed in a four-with-cox shell.

But the greatest gift of that year was the people I met. Little did I know they would become lasting friendships.

Jo rescued me. I was in the dorm laundry room, totally befuddled by the English version of washers and spin dryers. She immediately sensed my predicament and in her lively manner set about instructing me on the operating procedures. Hailing from the far north, Jo had a Geordie accent which added a language barrier to the session as I could barely understand her. But we muddled through and I found that she was equally curious about me and my “terrible American accent.” In short, we hit it off.

Mary was a good Catholic girl. I met her at a Catholic Society event. She was quiet but friendly and but we were drawn to each other. Discovering that we were both the studious type and lived in the same dorm, we established a fast bond. It was Mary who became my confidant. We could talk for hours, time slipping by unnoticed and never running out of conversation.

That was all forty years ago, almost to the day. And despite the passage of time our friendships have endured. In spite of the long distances between us, we have continued to see each other periodically through the years. We have even traveled to share our children's weddings. And regardless of communication barriers, we have stayed in touch. Mary and I are still avid talkers, thanks to Skype and other advances in technology. 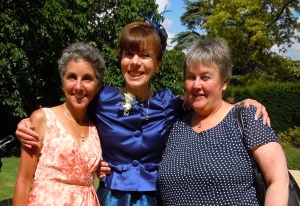 So it seems fitting that I am traveling on my own to England once again. This time for the sole purpose of visiting my friends. I know they have both been planning excursions, cooking up a storm, and scheming for the duration of my visit. And I can't wait to be back in Jolly Olde England, a place that won my heart that year I lived there (and the subsequent graduate year I finagled just to be able to return). But it's really all about the people. I can absorb my fill of ordered green countryside with its rambling stone walls and hedgerows, drink an abundance of properly brewed tea with milk and take in the ancient buildings while in their company.

I have no fear of running out of things to say. We have forty years of memories to draw upon, share and compare. Gaps to fill. Family and career moves to relate. I know it will be like we saw each other just yesterday. These are lifelong friends.