They call themselves the Silver Sax. Starting out as a quartet ten years ago, they have blossomed into a robust band of eleven, over half of which are saxophones which range from soprano to baritone. Jo's husband Peter is one of the original members. It was he who explained to me the significance of the name, which refers to the members' hair color. By happenstance, they were to play a charity event while I was there. It was the perfect event for our mini-reunion.

Mary and Shaun arrived toting a bottle of bubbly to celebrate the occasion. Mary, Jo and I were reunited one more time, now 40 years since we all first met at Durham University. We covered as much ground as we could over drinks and dinner, dragging up old memories and recounting recent updates. But the main event was still to come.

Although we knew Peter played in a band, apart from Jo the rest of us had never heard him play. In his quiet way, Peter made light of his musical endeavors, but we all suspected he underplayed his and the group's prowess. We were eager to hear it for ourselves.

It was an eclectic old building that housed the bar where the event was hosted in the large back room. Arriving early in time for band set-up we carefully selected a table mid-way back, knowing the band would produce a full sound. Procuring our beverages from the bar at the back, we settled in to watch the room fill. All manner of dress and age were represented, although most like us sported the same hair color as the band. 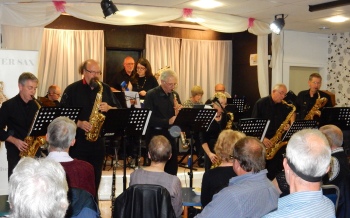 With the first note we knew we were in for a good night. The first half was comprised of big band music, and their renditions of Count Basie and Glenn Miller were a solid credit to the original jazz and swing music. What they lacked in trumpets and trombones, they made up for in saxophones, and very effectively so. It was good foot tapping music, and each piece was better than the last. The music was interspersed with tidbits about the music and the band by their leader, who proved to be enlightening and articulate as well as a talented musician.

After intermission, the second set changed gears entirely. Tackling the likes of the Beatles, Abba and the Beach Boys, the band rocked the house with their lively tunes. Foot tapping gave way to bodies jiving to the music. It couldn't be helped, it was that irresistible. Chicago followed and kept us so entertained that we begged for an encore when the time came. And the Silver Sax graciously (and readily) accommodated with a medley from Earth, Wind and Fire.

We all agreed that Peter had kept his musical skills and fellow musicians a good secret for far too long. But now that we knew better, we'd be back for more performances. To me sounds like a good excuse to return to England. I'm sure I could be talked into seeing my Durham friends again for another saxy reunion.