After a week of taking in all the outdoor activities, beauty, beach and ocean that Las Catalinas has to offer, it was time for a field trip. Rich took off his birding hat long enough to put on his travel planner persona, and came up with a destination that appealed to both of us – El Viejo Wetlands.

The preserve is owned by a successful sugar cane family that has set aside 5,000 acres of land as a wetlands refuge. Their boat trips offer views of not only birds but wildlife as well. Arriving plenty early for our 9:00am boat trip, we met Kevin our guide. As luck would have it, we had a boat and Kevin all to ourselves! The river was a fair distance from the main entrance and other facilities, and we had ample opportunity to learn how Kevin became a licensed guide and honed his English reading birding books available only in English. His expertise soon became very apparent to us.

We boarded one of the smaller boats and Caesar piloted us up and down the river. With thunderstorms the last two evenings as well as more rain in the mountains, the river was swollen and the current swift. Kevin pointed out the high water point much higher on the bank. That's where the river will be when the rainy season kicks in soon.

It didn't take long to begin sighting birds and animals. Both Kevin and Caesar were good at spotting them, and Caesar would maneuver the boat over for a close look. They had an eager customer in Rich, and indulged his enthusiasm for photography and finding new species. I left the little birds and far away specimens to Rich, but tried my hand at capturing the larger birds and animals. 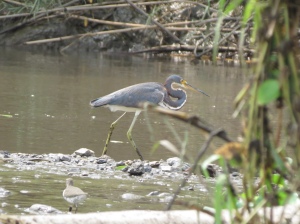 I sensed a bit of friendly competition between Rich and Kevin, vying to be the first to name each bird! Rich was a formidable opponent, but ultimately Kevin had the advantage, being more familiar with the local birds. As we drifted close to shore, Kevin challenged us to find the next specimen. He pointed out the tree, and it took a while before we could see them. I am proud to say I got it right – bats! Long nosed bats like the underside of trees he said, because they are so well camouflaged there. That's for sure!

Crocodiles were abundant along the shores. Most of the time all we could see were the tops of their floating bodies and an eye peering out over the water. But one in particular gave us a great show. He'd found a cache of fish and opened his mouth to strain them in, showing us his gruesome teeth. Suddenly, he was thrashing and splashing, having caught a good size fish. It was clear that the river was not a safe place to swim! 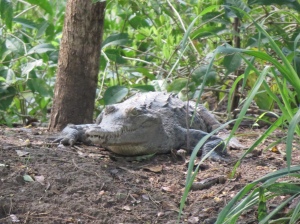 The day was cloudy and humid, which kept the sun at bay. With a good breeze on the river and the movement of the canopied boat, it was very pleasant out there plying the water. We were sorry to see the boat tour come to and end, but still had a treat in store.

Lunch awaited us in the beautifully restored Casona Hacienda El Viejo, a large wooden open air building. We enjoyed a typical Costa Rican meal, then spent time walking through the grounds. There were ample iguana present, including one that looked like a dinosaur and two fighting iguanas. They also liked to perch on the roof and supports for the building. We had to be careful where we walked! 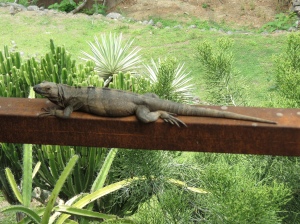 My travel guide did well. It was well worth the journey, and we both enjoyed our day trip to the El Viejo Wetlands.