In a world dominated by rejections, victory is all the sweeter.  When the email arrived, informing me that my piece “Late Arrival” had been accepted for Northland College’s WritersRead event, my heart danced.  As a writer, I celebrate any success, no matter how small.  Even seeing my work linger longer than usual in the “In Process” status of a publication’s submission process constitutes a win in my book.

I’d heard that the event was “a hoot.”  A friend who has read several times described it as “the best party for writers and readers anywhere.”  I was excited for both the opportunity and the entertainment.  But I woefully underestimated the impact of being a participant.

Nineteen pieces were selected for reading at the late January event.  Eight of us were from Duluth.  Sheer distance precluded our attending the scheduled rehearsal, and we were encouraged to arrange our own.  Little did I suspect that would set the stage for reaping the true value of the event.

As a group, we descended on the Spoken Word Open Mic night at Beaner’s Central Coffeehouse.  It was packed, due to an earlier political rally, and it was a long time before any of our names were called.  But one by one, we made our way up to the small stage, took a deep breath and read our pieces to an audience.  Just knowing there were friendly faces among the crowd was a boost, and certainly having live listeners was good preparation for the real thing.  I admired the quality of the work in our group, and relished their comments afterwards.

Just for good measure, a smaller group of us gathered in the black box theater at UMD about a week later.  This time we were reading only for ourselves, with the benefit of immediate feedback, discussion and do-overs.  I was beginning to get a feel for the generosity of these seasoned writers, and the unending support they gave one another – including me, the neophyte.

The evening of the event, participants gathered beforehand in the stainless-steel kingdom of the college kitchen.  While being treated to fresh pizzas made on the spot and sipping wine, we mingled.  In the quirky informal space it was easy to feel the spontaneous camaraderie among this collection of writers.

As promised, the event attracted a good crowd.  I marveled at the enthusiastic support for writers in the small northern communities along Lake Superior.  They were a lively and receptive audience as we each got up and read our piece.  Being second on the program quickly dispelled my nerves and I could settle in and enjoy the remainder of the readings.  The genres covered nonfiction, sudden fiction, micro-fiction, twitterature and poetry.  Each reader brought something unique to the event’s theme, “Gut Instinct,” rendered through humor, wit, poignancy and suspense.  I felt honored to be among the talent represented there.

The Duluth contingent heartily congratulated each reader from its numbers.  At the conclusion of the deliveries, we naturally clustered together.  Relishing the experience, snapping group photos, recalling snippets of the stories to savor, we ended the evening on a high note. 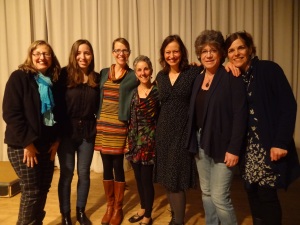 By pure happenstance, I met up with the bulk of the Duluth writers at breakfast the next morning at Café Coco in Washburn.  We swarmed a long table and spent the next two hours talking writing.  The spontaneous and genuine conversation was encouraging, supportive and friendly.  Despite my novice status, I felt a sense of belonging.  These people were here for me, as I was for them.  We all had something to share.  We all had something to give one another.

I drove home filled with inspiration, ambition and gratitude.  Being selected to read, what I considered my “win” was only the beginning.  I felt like a writer.  I felt like I belonged.  I had a new source of support for the lonely act of writing.  I couldn’t wait to write more, work harder and submit more.  Even if it meant more rejections.

Note: Wisconsin Public Radio recorded the WritersRead event, and aired it in two installments.  Click here to listen online or download the recording for the first hour.
(Shameless plug – my reading is 8:48 into this recording)  Click here for the second hour of readings.