The motions were familiar. Clad in spandex and strapping on my helmet, I clipped in and pedaled down the driveway. Heading out of town to explore the countryside. That’s where the familiarity ended.

We had planted ourselves in the heart of the Texas Hill Country, where spring was a real season. The sun radiated warmth and wildflowers bloomed in abundance, unlike the cold snow melt weather back home. Here the countryside held the promise of carefree cycling.

I had already done my homework. A visit to Bicycle Works, the local bike shop, yielded the friendly advice I expected. The woman behind the counter stopped working on the bicycle she had up on a stand to fill me in on the local routes. Tracing the colored lines on the maps that they produce, she narrated each option. It didn’t take me long to note that the routes varied in length from 30 to 100 miles. This is serious cycling territory. 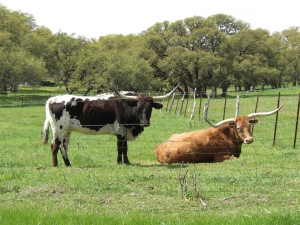 Each time I turned down a new lane, that little nagging thought wiggled into my brain.  I sure hope it’s not a dirt road…  But I needn’t have worried – every road in the county is paved!  But they do come with a hazard.  While the roads were in remarkably good condition, they were frequently sliced by tubular metal grates that rumbled and shook my entire being as I passed over them. Timid at first, I crossed the cattle grates slowly, hesitantly. But with practice came confidence, if not full speed. They also came with a warning: “Loose Livestock” Sure enough, I passed directly between Bessie #73 and her cousin #99 grazing on opposite edges of the road.

It wouldn’t be the hill country without a heavy dose of climbing. Roads ranged from long straight stretches to twisty windy curves, and all kept me pumping up and gliding down the hills. Frequent stream beds introduced spillways for flood season. For now they were all dry, but each involved a steep dip followed by a climb. It’s not a coincidence that I saved these routes for solo rides.

In contrast, Rich had a knack for mapping out routes with a purpose. Our first took us out to a local winery, where we were careful to limit our sampling to ensure a safe return ride. 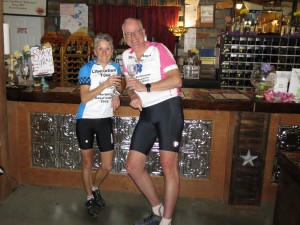 Luckenbach was our next destination, visiting on a quiet morning to take in the musical venue. 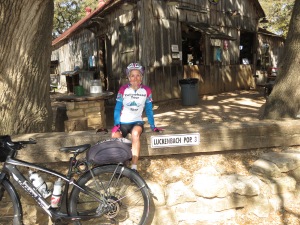 Ranging further afield, he devised a bike ride east of town. It took us through the tiny enclave of Albert, where the Dance Hall appeared to be very active, flanked by a BBQ Pit, an Icehouse and an historic school. It made us wish we could return on a lively evening to see it all in swing. On the final stretch, we cycled Ranch Road #1 right through the LBJ State Park and across the river from the LBJ Ranch.

In nearly two weeks, my bicycle and I covered a lot of ground.  By then ranch country became a lot more familiar.  Even the cattle grates.