The plan was to go hiking.  We were going to Madera Canyon, in the Santa Rita Mountains south of Tucson.  Even though it’s a birding destination, Rich assured me he was there to hike with me.  But there were caveats.  We had to stay near the flowing river.  Making our way up the canyon, I wasn’t allowed on the Nature Trail that ventured away from the water.  (This was the desert, after all, and birds flock to water.)

Reaching the top trailhead, we headed up the Carrie Nation Trail.  Yes, it followed a stream.  I tried to ignore the huffing and puffing behind me as I forged upward on the trail.  And then I heard it.  “I think I’m nearing my limit.”  He didn’t say he was done yet, so I kept going.

A young woman came down the trail toward us, and hoping to prolong this hike I pumped her for information.  How steep was it beyond here?  The news was reassuring.  But then she said the magic words.  “I just saw an Elegant Trogon.  He loves the sycamore trees, just above here.”

Suddenly Rich’s legs gained new strength.  He strode purposefully past me with a burst of energy.  He was on a mission.  I could barely keep up.

The Elegant Trogon has been in Rich’s sights for two years now.  The brilliant tropical bird’s range only barely reaches into far southern Arizona, Medera Canyon included.  Last year’s visit to this canyon was too early in the season and proved fruitless.  Last week’s visit was better timing, but also came up empty.  This trail is not where the bird had been sighted.  Rich wasn’t even looking for it.  But he smelled victory.

We soon ran into a handful of other birders toting cameras with obscenely long lenses.  They had already seen and photographed the elusive bird, and were hoping for another glimpse, more photographs.  Rich eagerly joined the little enclave, whispering, pointing, gesticulating and searching.  I did my best to melt into the background.  To remain silent and motionless, lest I spook the very bird they sought.

Tiring of the hushed drama, I left them to their hunt and continued up the trail.  We were here to hike, remember?  The trail petered out sooner than I expected, so I reluctantly turned around.  I found Rich and the pack further downstream than where I had left them.  But they didn’t notice me.  All cameras were trained on The Bird.

Lenses pointed and shutters clicked incessantly.  Arms stretch out and fingers silently pointed when the bird moved.  Photographers shifted accordingly.  New vantage points, more photographs.  And still I was blind to the subject that took over the souls of these intrepid birders.  All I saw was trees and leaves.

The hunt slowed temporarily and Rich took in the fact that I was there.  “Have you seen it?” he asked excitedly.  I shook my head.  I didn’t even know what the bird looked like.

With hundreds of images already safely saved to the memory disks on their cameras, Rich and the photographers eased up a bit.  Rich pointed out the bird, and I finally focused in on its brilliant red breast, the luminescent green glow of the feathers on its back.  Despite my firm stand that I am not a birder, would never be a birder, I couldn’t help but appreciate the beauty of this particular specimen.

The solitary bird toyed with these camera toting devotees all the way back down the trail.  He flitted from tree to tree, never too far to disappear from sight.  Even I got the hang of glimpsing the red breast as he took flight and following it to his next perch.

The camaraderie of the little group grew as we inched our way along, and they even drew me into their huddle to make sure I could see the bird’s latest landing.  Having nothing else to do, I succumbed to the impulse to remove the lens cap from my own camera, hunker down to steady my zoom lens and click the shutter.  Oh cool, I got him!  I tried again.  And again. 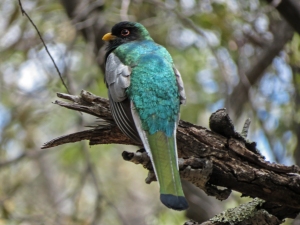 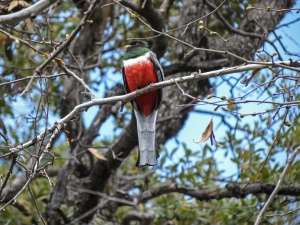 By the time we reached the trailhead, Rich was bursting with excitement.  And gratitude for my patience while he pursued the Elegant Trogon.  So I seized the opportunity.  “That’s okay.  You can keep birding.  While I take the Nature Trail back down to the car.”  I was happy for him.  But I still had some hiking to do.

4 thoughts on “Life with a Birder”