We were supposed to be in Milwaukee today.  We’re not.  Our grandson Crosby was going to be baptized today.  It didn’t happen.  Our whole family planned to gather for the occasion.  We didn’t.  But it still IS Easter today.  We may all be distanced by the coronavirus, but it can’t stop our religious holidays nor our own way of observing them.

It was my son, Erik, who came up with the family brunch idea.  “Since we can’t all be together,” he texted (sent only to the cooks in the family, of which he is one), “what if we each contributed a favorite recipe and we all made the same brunch?  We can all have the same meal and think of one another.”  It sold instantly.

Soon questions and hints flew between cooks.  Many of the quandaries were over substitutions.  “I can’t get bread flour – can I use all-purpose instead?”  “It’s okay to leave out the mushrooms.”  “We’re using broccoli instead of spinach in the eggs.”  Anything goes.

It was a solid morning of cooking even with advance preparation.  I prepped all my ingredients ahead of time.  Some made their cinnamon bread the night before.  As the intensity of the cooking increased, so did the flow of texts and photos as each family cook documented their progress.  We might not all be in the same kitchen, but it sure felt like it.  We were all battling the same ingredients with similar timelines. 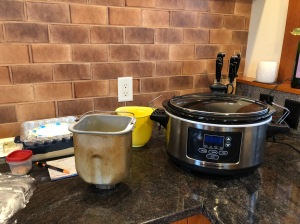 We all took time out for our virtual church services, relishing the extra music and special effort that went into this highest of holy days.  I hate to admit it, but I did sneak out to put the cinnamon bread in the oven during a musical interlude.

Soon the texts quieted down.  Final pictures of families gathered at the table were posted and we all sat down to enjoy our meal.  Apart, but together.  All enjoying the same dishes, savoring the flavors and thinking of one another.  Looking at each dish and remembering who contributed it to the feast. 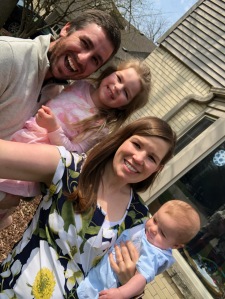 Easter came in all its glory.  Family “gathered” and we celebrated “together.”  As a final touch, son Carl alerted us to Andrea Bocelli’s Easter concert in the empty Duomo in Milan, which was our brunch music.  Listening to the notes that thrilled the air invoked hope.  That we will overcome, and be reunited.  Stronger than ever.