It’s not easy being the wife of a birder.

I am snug in bed thinking about getting up but not actually doing so quite yet.  From the other room, I hear my phone ring.  At 6am it can only be one person – either that or something terrible has happened.  Sure enough, it’s Rich.

“Get dressed right away!  You have to come over here and see this!  One of the owlets is on the ground!”  Even in my groggy state I know right where he is, and exactly what he is talking about.

For the past three months, Rich has been visiting “his owls.”  It took him a dozen wintry searches for the mating Great Horned Owls, triangulating their hooting, and looking for them in the trees.  But it all paid off when he found their nest.  It is in the woods less than 10 minutes by foot from our house.  In late winter he watched Mom Owl on the nest and Dad Owl hunting for food.  When they produced three baby owlets, you’d think Rich had new grandkids!  He visited them on a regular basis, reporting back their progress and how fast they were growing. 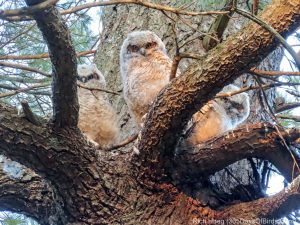 When the coronavirus hit and we took to sheltering in place, Rich’s vigil escalated.  What else was there to do?  He began checking on them multiple times a day.  Whenever things got dull, he’d head out into the woods again.  Or any time he heard a crow attack – a sure sign they were pestering the owls – he returned to the scene to make sure his owlets were still okay.  I kidded him that he spent more time with them than with me.

Learning their nocturnal habits, Rich began refining his timing.  Early morning when the owlets were being fed before sleeping, or evenings when they were becoming active again were the best time to see them.  He even lured me over one evening, and I succumbed to the cuteness factor, staying to watch the three sets of owl eyes peer down at me from their branches high in the tree.  They really were hard to resist.  I went back a few nights later. 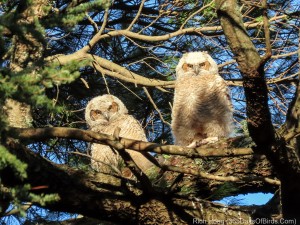 This morning the urgency in his voice propels me out the door.  “It’s a once in a lifetime opportunity!” he claims.  I’m not a birder, but I know better than to disappoint one.  Trotting over to the nesting area, I spot Rich’s red jacket in the woods.  Creeping up next to him, he points out the owlet – just 40 yards away, perched on a broken tree branch just a couple feet off the ground.  It’s one thing seeing an owl up high in a tree.  It’s another to observe it at eye level.

“I found him on the path.  He was being hassled by the crows and was vulnerable in the open space, so I flushed him into the woods.  Mom and Dad are up in the trees trying to protect him.  I’m doing the same on the ground.”  We creep a little closer, all the while being watched by those gold rimmed eyes. 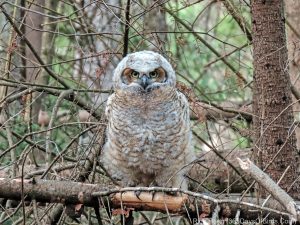 This owlet is not so little any more.  He’s over a foot tall, and has already mastered short flights between trees.  Silently I peer at this fluffy white wonder, little horns already forming atop his head, signature owl eyes staring back at me.  Even lacking any affinity for birding, I can’t help but be entranced.

The owlet clearly is not in any hurry to move.  He perches motionless except for his pivoting head and blinking eyes.  Rich hunkers down for the long haul, watching, protecting, his camera shutter pulsing rapidly.  But I eventually reach my limit and turn to go.  Alarmed, the owlet puffs up and flexes his wings, in defense against this blue jacketed stranger who suddenly feels threatening.  His display reveals brown and black feathers, and he lowers his head to glare at me.  As soon as he realizes I am retreating, he resumes his stationary pose. 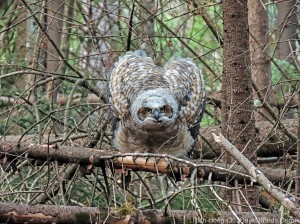 I certainly didn’t expect to run out of the house at 6am this morning.  Nor would I have chosen to spend my first waking minutes “birding.”  But this is one of those times when it was worth heeding that wake-up call from my resident birder.  It was a hoot.

All photos by Rich Hoeg.  More photos, videos and details can be found on his blog, 365DaysOfBirds.

2 thoughts on “A Wake-up Call”