When my children were very little, I

took up running to stay in shape.  As in most things I do, I jumped into it wholeheartedly, and was soon hooked on running and entering local races.  When I could, I’d bring the kids along and enter them in the kids’ Fun Runs.  They even humored me when they got older, and joined me in some 10k races.

Time marches on.  Kids grow up and become 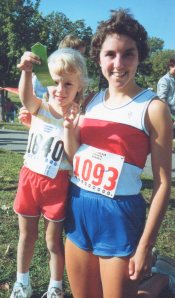 more independent, and parents have more time.  I moved up to half-marathons and then marathons.  It was Mom’s running obsession, but they were always there to cheer me on.  That was the extent of their involvement, or so I thought.

It wasn’t until they got into college that the seeds started to grow.  One by one, they took up running or cycling.  It wasn’t long before they too were reaching for extreme goals.  My daughter joined my husband and me running Grandma’s Marathon.  Two years later we added my youngest son as well!  Our middle son – always the independent thinker, no running for him, thank you – did the MS150 bike ride and the week-long RAGBRAI bike ride across Iowa.  And that was just the beginning – we have shared numerous races and events since then.

How did we become such an athletic family?  Those seeds must have germinated.

1 thought on “Planting the Seed”