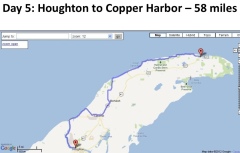 We both agree. This was our best day of cycling yet. Instead of being another long ride to complete the next leg of our journey, it felt more like a pleasure ride. And we loved every minute of it.

So what made it so special? Hugging the coastline. It was infinitely relaxing to cycle along with beautiful views of Lake Superior. We relished the small local roads that were devoid of traffic. And the weather gods favored us today. With forecasts of zero percent chance of rain, westerly winds to help push us along our way, and sunshine for most of the day, we had it made. It doesn’t get much better than that for cycling. 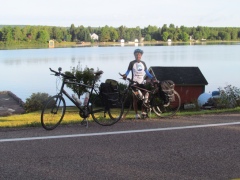 We first followed the waterway that leads from Houghton out to Lake Superior on the western side of the peninsula. The final vestiges of the morning’s fog burned off as we rode and revealed calm waters and sun soaked dwellings and boat houses on the opposite shore. Everything was bathed in the golden sun of morning, leaving a feeling of peacefulness.

The western shoreline offered plenty of scenery. We enjoyed seeing the wide variety of lake homes, cottages and mansions that lined the shore. Parks seemed to be frequently interspersed with the private lands, offering us opportunities to explore the beach, watch waves come crashing in, and take dozens of pictures. We found several lighthouse to check out along the way. And there was an historic bridge to see, although we were more fascinated with the arched wooden architecture of the newer replacement bridge. Waterfalls cascaded down the hillside and under the road. And there was always the big lake. As we neared Copper Harbor, the sandy beaches gave way to rockier shores, more like home. 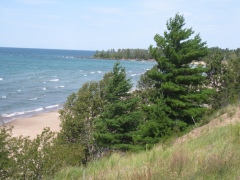 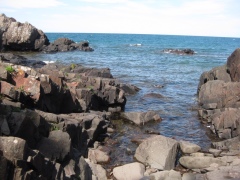 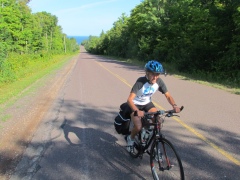 Our route had just one minor flaw. It forced us inland for a short distance, and that could only mean UP. We knew it was coming, we just didn’t know how bad it would be. When we rounded that corner, we could see the road rising in front of us. Not traversing the incline on an angle, not meandering, straight up. And I’m convinced that the sun chose just that time to beat down particularly fiercely. It took our lowest gears and a lot of pedal rotations, but we made it! Two and a half miles. However, on the flip side, we seemed to get a lot of mileage out of that rise in elevation. On our return to the shore, we got the longest drawn out downhill coast back to the water. 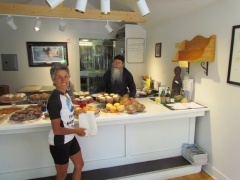 Now anyone who has read any of my previous posts about this cycling tour knows that treats are a required element of each day’s travels. While we normally favor ice cream or smoothies, today when faced with a cute little bakery in the curve of the road we just had to stop. But little did we know that The Jampot was more than just an ordinary bakery. It was the outlet for the labors of the Society of St. John Monastery, which was founded on the nearby shore by a small group of monks in 1983. Their initial penchant for picking wild berries and baking soon turned into a venture able to support their little community. We were served by a pleasant monk who happily described the plethora of decadent flavors of muffins, and left with a heavy bag of goodies. Only half of them made it into my panniers…

Our little motel in Copper Harbor was ideally situated right on the water, with a picturesque view of the harbor. What a great choice! We even had a back deck in a garden setting where we could relax and enjoy the view. Rich chose to use that spot for a different purpose… repairing a flat. In keeping with today’s theme of perfection, his back tire chose to deflate at the entrance to our motel. Even the first equipment failure did not blemish our cycling.

It’s a good thing that tomorrow is our “day off” from cycling. It would be difficult to top today’s ride.