We awoke to the sound of wet tires swishing on the pavement after additional overnight thunderstorms. Given that we had a shorter distance to travel today, there was little reason to rush the start of our ride. Our only concern was the narrow shoulders along today’s stretch of highway 61. But we counted on having less traffic heading south on a Friday to ease that issue. In fact, the situation was not quite as bad as we expected. Recent roadwork had improved the width and surface of the shoulders in many places. However, between the Cascade State Park Headquarters and Lutsen ski resort they were truly terrible. We had two feet at most, and the pavement was crumbling. We took to weaving between road and shoulder, depending on whether there were cars coming or not. It was nerve wracking, even with weekday traffic. The worst incident was a big SUV passing a car in the opposite direction, which put him on our side of the road. He passed within 18 inches of us – very unnerving! We dubbed that 9 mile section of road the “least pleasant” of our whole trip.

I don’t think I had really thought before about which sections of the North Shore had more parks and sights than others. When traveling by car, one passes through them in a short enough span that it makes little difference. On a bike it is a lot more apparent. Today’s miles included few such attractions. So we made up for it with stops of our own making. 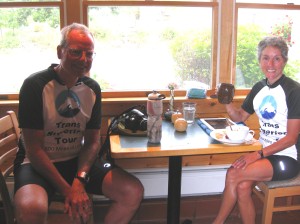 First was breakfast. We’ve taken to putting 20-30 miles behind us then stopping for a good breakfast. Today at my insistence we hit an old favorite of mine, the Coho Cafe in Tofte. In addition to tasty meals (and a latte at last for me), we fed our internet-starved cravings. We have been mostly devoid of internet and cell phone coverage the last three nights, which was not entirely a bad thing. But we were eager to update our blogs, so we each got a posting up during breakfast.

Next we visited friend and author Beryl Singleton Bissell. I read her first book, The Scent of God, a number of years ago, then was reintroduced to her work when she put out A View of the Lake about being a transplant from the Twin Cities in Schroeder MN. I was enthralled with both books, and thrilled when she accepted my invitation to meet with my book club last fall. She provided a wonderful evening of discussion and sharing

abut her writing. Being able to see her in her North Shore home surroundings was a real treat. By then the day had turned warm and sunny, and we had a lovely visit on her deck overlooking the lake. A highlight was seeing her little red writing shed, which she used on a writing retreat and ultimately was able to move to her own yard. It was an uplifting and inspiring visit. 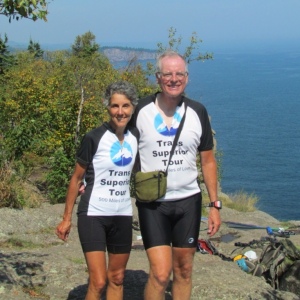 The sun grew warmer and the day hotter. In fact, this was our warmest day yet. So when Rich suggested we cycle up to Palisade Head, I was astounded. But game! It was a short distance to the amazing overlook area, but had the steepest inclines we had yet to encounter. I was determined not to walk my bike, but it did require standing up to surmount some of those hills! The view was worth it, though. Not even the slight haze in the distance could detract from the vistas. Two rock climbers

were there scaling the vertical drop. While their endeavors seemed unfathomable to us, we were fascinated by it and completely floored when the woman climber completed the trip down and back up again in less than 10 minutes.

We completed our day with an interview with a reporter from the Lake County News-Chronicle. I’d done a “media blitz” the day before we started our trip, contacting the local newspapers in the cities where we were going to be staying. Several of them followed up on it, some without our even knowing it. We learned from some other cyclists near Copper Harbor that they’d read about us in the paper! We felt quite the celebrities.