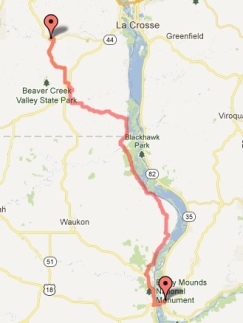 By all rights, you should not be reading this post. We are supposed to be in a tent, sans Internet. But we caved. Instead, we are in a modest but well-equipped Mom and Pop motel room. But I'm getting ahead of myself.

Today we crossed the Mississippi River and headed back North. It started out really well. We were on a much smaller road with little traffic. We were at river level, meaning it was nice and flat. And the wind was finally behind us for a change. The first thing that I noticed was that in Iowa, they managed to squeeze houses, shacks and mobile homes between the railroad tracks and the river. Some of them were wisely built on stilts. I'd just never seen an elevated mobile home before! But it was justified – the river has just come down from flooding its banks, and trees were still marooned in the middle of the river.

Early on we stopped at a National Monument to see some effigy mounds. There we met friendly volunteers, one of whom clued us in to the long, steep hill we were about to climb. We were grateful for the forewarning, as the 3-mile hill lived up to his predictions. What we didn't know was that it was only the first of four such brutal ascents we would face today! Every time we left the edge of the river, it meant a stiff hill to mount the bluffs. As long as we were in river country, that meant a steep downhill back to river level. Rich loved plummeting down at great speed, but to me (who hates speeding down) it was just unravelling all the hard work we'd just done. Our final hill took us inland for our detour into southeastern Minnesota. That time it felt rewarding to stay “up top” for the remainder of the day's ride. 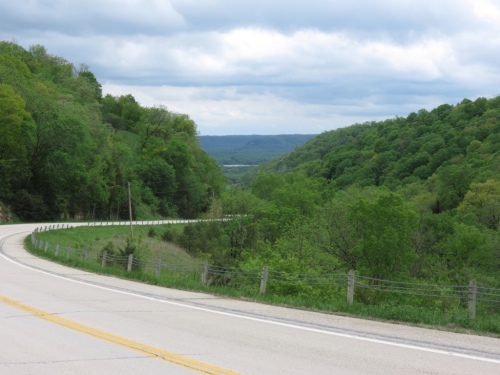 We were definitely in the heart of farmland, first in Iowa and then Minnesota. Pretty farm buildings, tilled fields, curious cows and a few horses were the primary features of the landscape. We even set one herd of cows off in a running pack as we passed. Given the quiet country roads, it was a very peaceful ride.

We managed to spend some extra quality time among the farms while Rich repaired a flat tire on the rear of his bike. It was our first repair job of the trip, and happened as we were closing in on the last major town for the day. While it was a straightforward repair, it did set us behind and Rich in particular was already rather fried from the hill work. (Is this where I mention that considering his 57 years of age and the added burden of carrying camping equipment that he decided it was A-OK to walk up the steepest hills? He said I could… To be fair, then I need also include the fact that I would have been hopeless at replacing that inner tube. So I guess we're even.)

It was at that point when Rich announced he was making an executive decision. We would seek out a modest motel instead of camping tonight. After all, he reasoned, it was our anniversary. Who was I to argue? I did feel a quick pang of regret that we'd given in so easily, but it was easily squelched.

And so it was that we enjoyed a nice dinner and a bottle of wine to celebrate the occasion this evening. It also gave me the opportunity to drag Rich to the Dairy Queen to consume ice cream cones, just like we did on our wedding day 30 years ago. We have plenty of nights to spend in a tent. I enjoyed the outcome of this executive's decision.

1 thought on “Cycling and Executive Decisions”