I’m still working on reconciling the idea of being a “senior.” That’s what we’re referred to here at Snow Mountain Ranch, the Senior Volunteers. But it does come with its perks, so I’m learning to overlook the senior bit. Today’s outing was one of those opportunities.

When we first arrived, we heard about the various activities and trips planned for the volunteers. The one that everyone was raving about was the annual trip to Glenwood Springs. The main attraction was the train ride through the mountains, following the Colorado River. It didn’t long for us to add our names to the list, and begin looking forward to the excursion.

The best part about the trip was that Snow Mountain Ranch provided all the transportation and arrangements except the train ticket. All we had to do was show up in the lobby at 6:00am sharp and board their comfortable shuttle bus. From there it was a three hour drive through deep canyons and beautiful mountain country. We passed numerous downhill ski areas with plentiful runs, obstacles and terrain to test all skiers. And we were all grateful for a quick stop at a good coffee shop en route.

The biggest feature of the trip was the scenery, so we were very thankful to have good weather. The recent snowfalls and blowing winds would have brought down a curtain between us and the mountains, and thankfully that didn’t happen. By the time we reached Glenwood Springs, the skies had cleared to a deep blue that accentuated the mountains that surrounded the town.

We had about 2 1/2 hours in Glenwood Springs, which was plenty of time to scatter and explore the town. We checked out the main sights, which were the historic hotel and the hot springs. The springs feed two huge long pools, and even in the winter weather there were plenty of people “taking the waters.” At the farthest end, and the coolest, they even had lap lanes set up – had we been there longer, I would have wished for my swim suit. The day heated up quickly with the sunshine and lower elevation, and it felt positively balmy walking around town gradually shedding our gloves and extra layers.

At noon we all reconvened at the train station, where we boarded Amtrak’s California Zephyr. As soon as possible, we all headed up to the observation car, which was on the top level with windows in the ceiling in addition to the large side windows – we wanted the most view possible. The sun continued to shine, showing off the sights in the best light possible. 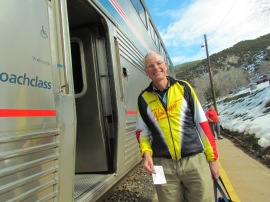 Although it was the reverse of our van ride, the route was only the same at the very start of the rail trip. We followed the Colorado River the whole

way, and being cyclists, we were quite enamored with the bike trail that also paralleled the river nearly the whole way. Seeing it all from a train, where we were free to move around, switch sides of the car at will, chat with other travelers and travel at a smooth slow pace made it the optimal scenic tour. 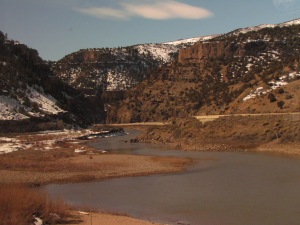 The scenery was actually quite varied. We started off traveling through a canyon surrounded by red rocks in stunning layered formations. Gradually the grade of the landscape lessened and we had broader views. At the lower elevations, the river was mostly open and flowing, and we even saw fly fishermen in the water. There was a lot less snow, and we passed a lot of scrub land as well as ranches.

As the elevation increased, the scenery became more dramatic once again. Soon we were perched on the edge of the river and passed through numerous short tunnels. Across the way, the rocky land became quite inhospitable, and the engineer narrating our journey pointed out treacherous old mule routes on narrow ledges on the mountainside. Although the skies clouded up, reducing our impulse to take pictures minus the dramatic colors, we could still see clearly off to the distance and the snowy peaks beyond. We navigated another beautiful canyon, the snow on the ground increased, and the river was increasingly ice covered.

The last stretch of the trip was a haven for wildlife. Although we’d seen numerous mule deer along the way with their huge ears, suddenly there were tracks all over the snow. We saw a large herd of elk, some complete with huge antlers. One group was intent on seeing moose, as they had on a recent trip, and sure enough – we saw two moose lounging in a field! Bald eagles were also in abundance.

With so much to see, the four hours on the train went by quickly. As soon as we stepped onto the platform, we could see our shuttle bus waiting for us – perfectly timed for our return to Snow Mountain Ranch. It was a great way to spend the day, and I reveled in the excuse to relax, rest and just watch the scenery go by. It’s been a long time since I’ve been on a field trip. And this one was a real winner.