Does two years running make an annual event?  I’d like to think so.  For the second year in a row, Rich and I have been lured up the North Shore for our inaugural spring bike ride along the lake.  All it takes is a good weather forecast, plenty of warm sunshine and that glistening blue water.  Oh, and the disappearance of snow.  Or most of it, anyway.

By coincidence we chose a Monday exactly one week earlier than last year’s ride.  But the conditions were strikingly similar.  The temperatures were in the 50s and the wind was off the land, avoiding that cold lake wind chill factor.

We decided to ride from Gooseberry Falls State Park to Beaver Bay and back again.  That section of Lake Superior was ice-free near the shore, so we were able to enjoy views of the open water at its finest.  Conditions on land were not quite so uniform.  Wherever the sun shone, the ground was bare.  But shady areas still had an abundance of snow, and deep in the woods winter still reigned.

The same held true on the Gitchi-Gami State Trail.  Wherever it paralleled highway 61 and had plenty of sun, it was clear.  But where it dipped down toward the lake and snaked through the woods, the bike trail was buried in snow. We hopscotched from trail to highway shoulders as conditions warranted.  Fortunately, there was little traffic to bother us on a spring weekday morning. 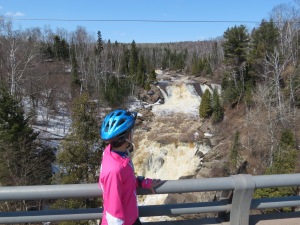 With the spring runoff, the rivers and streams were in prime form.  Gooseberry Falls was a rushing torrent, with water gushing over the rocks in a thunderous roar.  Along the shore, water forced its way over the stone cliffs, forming spontaneous waterfalls where normally none exist.  Ordinarily the Beaver River is barely noticeable when driving over the bridge, but that day it was hard to miss the teeming water. 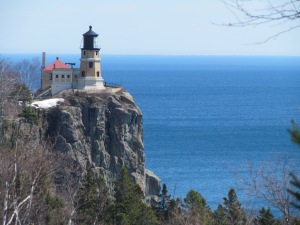 The whole premise of this early spring ride was to enjoy the journey.  Since we had few miles under our wheels yet this season, there was no point in trying to press for speed.  And the novelty of the warm day just begged for lingering.  All the better for taking in the sights along the way.  No trip up the Shore is complete without stopping to admire Split Rock Lighthouse.  And we had to stop for

The only thing missing was an ice cream break.  I’m still not sure how we let that happen.  We will have to improve on that next year.  On the first balmy spring day.  The 3rd annual rite of spring.