It was just about a year ago that by coincidence we saw a group of kayakers shooting the waterfall on Amity Creek just across from our house.  It was a thrill to watch what we considered to be a group of dare devil kayakers.  Little did we know that there was an organized kayak race on its sister waterway, Lester River.

With its flow swollen by the spring runoff, Lester River becomes a roaring torrent for a finite period of time.  The near-record breaking snowfalls the last two winters boosted its rapids to a Class V rating on the International Scale of River Difficulty.  Wikipedia describes it as whitewater, large waves, continuous rapids, large rocks and hazards, maybe a large drop, precise maneuvering.  It is designated for “expert skill level.”  A natural draw for kayakers looking for a challenge.

This was the second year for the Lester River Race, and I eagerly made the short walk over to join friends to watch.  Race organizers had graciously marked paths from Lester River Road to the best viewing spots, and soon I was seated on a huge boulder looking straight across at a boiling waterfall.  Although it was only 40 degrees, the sun was warm and the hillsides, rocks and riverbanks were speckled with people assembled to watch the race.

Spectating was a wait-and-see activity, watching the water seemingly for ages then finally spotting a kayaker at the top of the falls.  In a whoosh and a splash, over he’d go amidst roiling white water and bob up in the circular flow down below.  I snapped pictures as best I could, using the continuous shooting mode on my camera.  What I found most 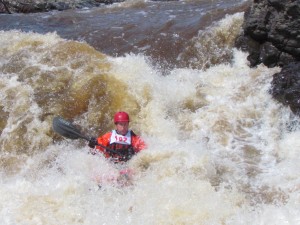 entertaining after the fact was being able to see the expressions on the kayakers faces as they advanced down the falls!  Click on the photos to enlarge, and see for yourself.

One kayak made an appearance without its owner.  We wondered how far upstream he had capsized.  With an abundance of spotters and safety personnel along the course, we assumed he had been successfully rescued.

The race was run in two heats, so we decided to try a different vantage point for the second set of competitors.  Moving upstream, we found long stretches of rapids, midstream boulders, low overhanging branches and other

obstacles.  There we were able to see the kayakers navigate seemingly unpassable waters.  And somehow they managed to make it look easy.

It was a great afternoon’s entertainment.  I wouldn’t dream of attempting it, but had a lot of fun watching those who did.  And I haven’t figured out if they are courageous or crazy.