It’s not every family that has a mountain named for them.  But that was one of the legacies my great-grandfather left for us.  For the record, this is no piddly little peak.  Mt. Brewer rises 13,576 feet high in the Sierra Nevada Range in California.

Back in 1860, Josiah Whitney headed up the first Geological Survey of the State of California.  He selected fellow Yale graduate William Henry Brewer to lead the field survey.  Over the next four years, my great-grandfather Brewer traveled over 14,000 miles mapping California’s topography as well as cataloging and collecting geological and botanical samples.

On July 2, 1864 Brewer and his team made the first ascent of Mt. Brewer.  The found the final climb to be much harder and higher than expected, traveling over steep rocks.  But once at the top they were amazed at the view – “Such a landscape!” Brewer exclaimed in his journal, surrounded by a hundred peaks over 13,000 feet.  In fact, from the summit Brewer’s survey party was the first to identify the highest peak in the range, Mt. Whitney.

Over 100 years and three generations later, my older brother, my sister and her boyfriend (now husband) made the second family trek up Mt. Brewer.  Somehow it seemed fitting, as my brother is named after William Henry Brewer.  They boldly named their trip the Great Mount Brewer Expedition, and spent five days backpacking up the mountain and back.  They left the following entry in the log at the top:  “William Henry Brewer and party climbed this peak 106 years after our great-grandfather, William Henry Brewer.”  I was in awe of my siblings’ accomplishment, especially after they were featured in a big newspaper story when they returned.

Carl and Erik’s planned route to the top

Now 150 years since Brewer’s first ascent, two of his great-great-grandsons are making the same trip.  My sons Carl and Erik leave this week to scale our family mountain.  If all goes as planned, they expect to complete their journey in three days, but have allowed four just in case.  Since they have planned a circular route, it means carrying all their gear to the summit.   I’ve been informed that only about half the route is on established trails.  Getting to the top requires finding their way off-trail.  They assure me that they are good with maps and a compass.

I’m thrilled that my sons care enough about our family history to carry out this challenge.  I’m excited to think about their new entry in that log at the top.  It’s an adventure I’ve dreamed of doing, but realistically will resort to living vicariously through their anecdotes and tales.  I’m sure there will be plenty to tell.  That’s a lot of mountain to claim and to climb. 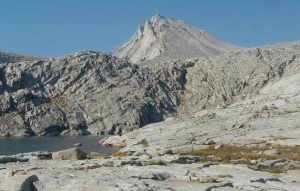