What else would you want do for a 60th birthday but go on a 60 mile bike ride?  When my friend Myra proposed it, her birthday idea seemed totally reasonable.  Perfect, really.  Clearly we think alike.  It’s great having a friend as committed to fit activity and the outdoors as I am. 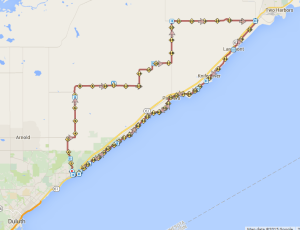 It was a great day for cycling.  Warm inland and as always, cooler by the lake.  We chose a route that started on Seven Bridges Road, going up, up, up to start and then leveling out once we were on top away from the lake.  The farther we went the less traffic we had on the roads, and we were able to cycle and talk as we usually do.  Puttering along was fine with us.

Once back down at the lake, we stopped for a bit of a break and refreshments at the Mocha Moose, always a favorite of mine.  Feeling good, we continued down the shore.  Until just past Knife River.  There we were stopped cold – Myra’s rear tire was flat.  She had no spare, and although I had one that would fit and the necessary tools, she was reluctant to even try to change it.  I couldn’t blame her, neither of us has done it on our own.  Surprisingly calm and unruffled by it all, Myra proposed the only solution.  I would bike the 13 miles home to get my car and return to rescue her.  Meanwhile, she’d continue walking her bike.

With a tailwind and mostly flat terrain I fairly flew down the Scenic highway.  The scenery barely registered in my brain as I zoomed along, and at one point I happened to notice was was going 18 miles an hour.  After all, I was on a mission.  As I approached the intersection with the expressway, with just a mile to go, there was Myra – cycling toward me!  Huh?  Someone had come along and offered to transport her home with her bike, and rather than stopping to inform me as they passed on the road, she told them, “Oh no, I want to freak her out!”  She certainly did. 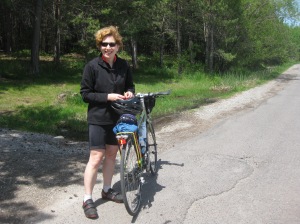 It never occurred to either of us to abandon our ride, in light of the circumstances.  Myra has a fleet of bikes, so she had just hopped on another one and we were good to go.  We headed back up the shore nearly to the scene of the flat and back again, to perfectly complete the 60 mile ride – for Myra anyway.  I logged a total of 71.

It wasn’t quite what we’d planned, but there was little harm in the outcome.  In fact, it delayed us less than an hour and solved the problem of where to cycle for our final 13 miles.  It just took a bit of recalculating. 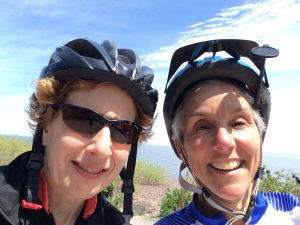