I thought that cycle touring reduced life to its simplest elements. But I've just discovered an even more streamlined way to cycle. Have credit card, will travel.

Rather than loading up our panniers and schlepping camping gear, for this tour we used only our day bags and brought minimal goods. A change of underwear, toothbrush and t-shirt and shorts were the basics. I threw in a cycling jacket, which I was glad to have for the cooler mornings. The bulk of the weight came from the camera, smartphone and tablet we each carried, and a few bike tools. That – and our credit card – was it.

This approach is best suited to short trips, so Rich came up with a two-day out-and-back route along the Wisconsin River for this inaugural voyage. Starting in Bridgeport, near Prairie du Chien, our destination was Spring Green, 60 miles away. We had our choice of roads on each side of the river, and sampled some of each. While it would have been nice to make it a circle tour, we quickly learned that some roads were best avoided and others bore repeating. So we sashayed across the river and back.

Logistics were super easy. Staying at the Captain's Cove Motel in Bridgeport before and after the trip, gave us a place to leave our car. Not only that, but they allowed us to leave all our non-cycling gear in the motel room, and even offered to come get us should we have problems en route. True hospitality. At the other end, a motel room awaited us in Spring Green. In between, all we had to do was cycle. 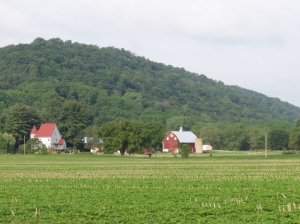 As usual, Rich picked an excellent route. Not only was it scenic, but the roads were good for cycling. It helped that we were traveling mid-week, reducing the traffic. Although we followed the Wisconsin River, there were actually limited sections in which we could see the river. But even away from the water, we rode through beautiful farmland with prosperous looking farms and healthy green crops. This is called the “Driftless Area” because the glaciers missed it when moving through the rest of the Midwest. So it is largely rolling with long tree covered ridges and bluffs.

With so little gear, packing and unpacking took only minutes. We were able to hit the road by 6:30 each morning with ease. Following our preferred style of cycle touring, we put in a good 20 miles before stopping for breakfast. Our favorite venue was the Unique Café in Boscobel, which was filled with memorabilia and still kept its old style charm. We were impressed with how vibrant all the towns were along the river, offering interesting places to explore or pretty parks where we happily rested. 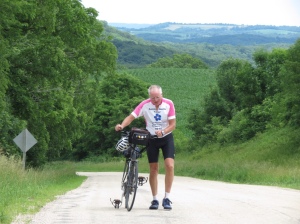 For the most part, the cycling was fairly easy. We had one big hill at the start of the first day, which I managed to block from my memory until our return. The second encounter was far worse, coming after 50 miles already and when the sun was very toasty. That was one long incline I was glad to complete. Rich liked it even less. My favorite stretches were on the small back roads. Armed with my favorite paper map in front me, I spotted a quiet alternate road on the way back. It stayed at the base of the hills and wound through quiet woods and farmland. That was a good find.

Our early starts and rapid progress gave us plenty of time to explore along the way. Naturally, Rich had his eye out for birds, but I was actually the one who spied the Trumpter Swan family. He still got the best photo, though.

No cycling trip would be complete without at least one “purple cow” – I made friends with this crazy cyclist along the way.

I couldn't go to Spring Green without visiting something belonging to Frank Lloyd Wright. So while Rich rested in the motel room I set out on my bike once again. Not having the time for a house tour of Taliesin, I made do with the visitor center that he designed, and tried to get a glimpse of his house from the road. 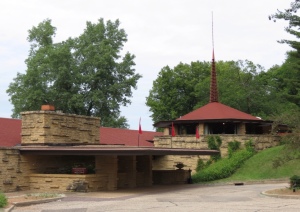 And just to prove that we actually were near the river…

We both agree, this was a most successful experiment. We brought just the right stuff, enjoyed cycling without heavily laden bikes, and appreciated the freedom. We're not ready to give up our long tours, but we'll be credit card touring again, for sure.