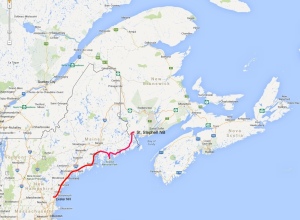 Having reached the northernmost border of Maine's coast, we bid a fond farewell to Carl and Myra. With job responsibilities awaiting them, they had to return to the real world. So they loaded their bikes into a U-Haul to return to their starting point and travel home.

Now it's just the two of us for the next two months and cycling through the Canadian Maritimes. This is how we're used to traveling, so there shouldn't be too many surprises. It was the foursome that was unique for us. So how did it go?

It was definitely different, with multiple personalities, needs, speeds and quirks to accommodate. And there's not a weak personality in the bunch. But the camaraderie more than made up for it. There was always someone who could lighten the mood in a tough spot, and conversation never lagged. It was good to have others to inject ideas about our travels, and it kept the experience fresh and less predictable. I also enjoyed the humor they contributed to each day.

In many ways, it went much as I expected from this cast of characters. True to form, after meandering along with the rest of us for a while, Carl's youthful energy would surface. About once a day the urge would strike and he'd surge ahead, rapidly disappearing from sight and leaving the three oldies miles behind. We didn't mind, and had no desire (or ability) to try and keep up. Eventually we'd get a text informing us where to find him, which was inevitably on a deck enjoying a cold beer. Following his libations, he was content to slow down and cycle with us again. Ah, youth!

Rich, Myra and I travelled in a loose pack. Frequently, we'd string out, hoping that each person was keeping track of the one behind them so we didn't lose anyone. Other times we'd stay in a tighter group, trading positions depending on whether we were going uphill or down. When possible, Myra and I cycled close enough together to carry on a conversation, traffic noise permitting.

Meals were interesting, with four very different metabolisms and food preferences. Rich had the need for the most fuel and “real food” cooked and served in restaurants. His pace always picked up significantly after each meal. Myra's food needs were constant. In addition to the cafe stops, she had a steady supply of bagels and other nutritional snacks stashed in her front bag to keep her going. Carl seemed to survive on whatever food stops we made, and I had the smallest appetite of all. I was happiest on the mornings when I could find a coffee shop with a good latte and scones.

When it came to our daily schedule, there were two camps. Rich and are early risers and liked to be up and out on the road as early as possible. Carl had a more relaxed attitude about morning start time, but having grown up with us, he knew enough to stick to the agenda. To Myra, our idea of early was the middle of the night. But there was little to argue against getting an early start when the temperatures were cooler and it was less windy. So most often we won out on that one. The main exception was when we stayed in an old country inn. The homemade muffins with fresh fruit and yogurt promised in the included breakfast was too tempting to miss. But it meant waiting until the excruciatingly late hour of 8:00am to eat before starting for the day. Carl and Myra were thrilled. And I have to admit I enjoyed that civilized start to our morning. 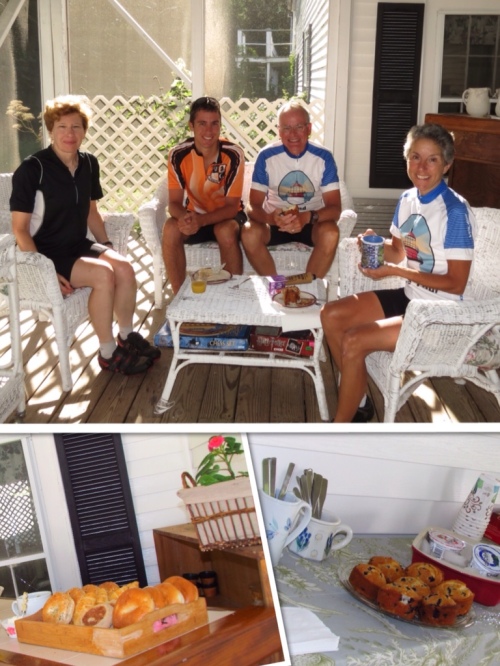 We'll miss our cycling buddies. We wish them safe travels home and hope they think of us, still out on the road. Still cycling.