We thought we were prepared for anything. But we were wrong. Setting out from Rimouski, which turned out to be a very bike-friendly city with a wonderful system of cycling paths, already a light rain was falling. We waved and grinned at other cyclists, united in our resistance to the conditions and considering ourselves among the hard core. We convinced ourselves that it was better than facing stiff headwinds. That it wouldn't last. And that we could make 60 miles today.

Ten miles into the ride the rain was coming down hard. The temperature dropped into the 40s, and the wind whipped away what little warmth we had. The big highway that had drained off the major traffic the day before joined our route. Semis thundered by, not only sucking us into their slipstream but dousing us with their heavy road spray.

Stopping under the awning of a gas station to wait out a particularly heavy burst of rain, I added a layer of clothing and even Rich began to shiver. We made a pact – next motel we find, we stop. Checking with the gas station attendant, we learned the bad news. The next motel was 12 miles down the road – at least an hour away for us. There was nothing to do but forge on. The good news was that he was right – as promised we found a “Resto-Motel” which would satisfy not only our need for warmth and shelter, but also conquer our hunger. We limped in on our icy feet and tried to thaw our hands to sign the registration forms.

We only made 20 miles today. But the beauty of this trip is that we have no firm schedule. No need to press on foolishly. We can bail out when we want. And so we did.

Huddling under the porch of an abandoned restaurant

Drying out in our motel room 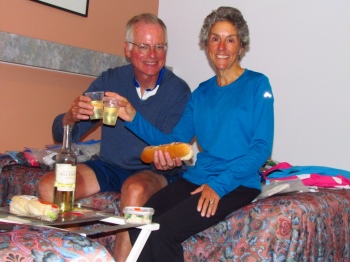