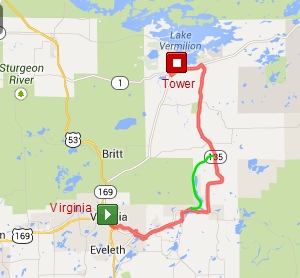 The forecast for today looked great. Sunshine and warm temps, perfect for cycling. But the weatherman got it wrong. Instead, we had intermittent rain showers, some of them quite heavy with a smattering of thunder. And yet, through the virtue of perfect timing, we managed to avoid much of the wet weather. And the sunshine in between was all the sweeter.

We started the morning with breakfast at a cafe that came straight out of the 50s. They served the standard fare, and had the requisite bar stools at the counter. Half the fun of traveling is discovering local eateries, and this downtown staple was pure local flavor. 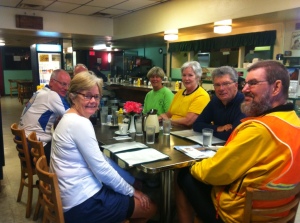 Our route retraced the Mesabi Trail back out to the highway that led to Tower. This time around we enjoyed the rolling hills and curves even more than yesterday. Reaching the end of the trail, we noticed dark clouds collecting overhead. Sure enough, soon it was raining. But being with people who are able to roll with the punches, it did little to dampen our spirits. Donning our rain jackets, we soldiered on. And eventually we managed to out cycle the rain clouds.

Our group split in two today, and I cycled in a group of four. When the Mesabi Trail mysteriously reappeared, we decided to take it, believing it would eventually return us to the highway. Despite some twists and turns, and moments of uncertainty, our hunch proved to be right. That section of trail, including the sunshine that had returned was delightful. We made our way to Giant’s Ridge ski area on smoothly paved trail and plenty of rolling hills. We had beautiful views of lakes and woods and returned to our intended route just short of our lunch spot, very pleased with our revised route. 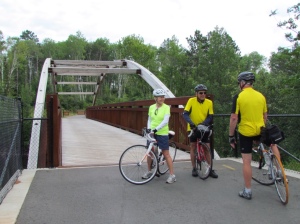 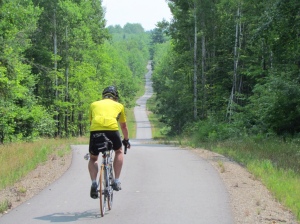 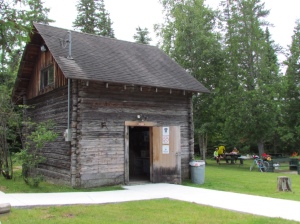 Our lunch stop was on the grounds of a Finnish homestead – a refreshing break.

The afternoon’s main attraction was taking the tour of the Soudan Mine. And it just happened to coincide with another bout of rain, which we totally missed. Outfitted in warm clothes and hard hats, we descended in mine shaft to reach the 27th level of the mine, 1/2 mile underground! Crammed into the tiny elevator box, it rattled and shook noisily as we plummeted at rapid speed. Frankly it was a relief to feel it finally begin to slow and eventually stop. As promised, the mine was a cool 51 degrees down there.

We continued with another 1/2 mile ride, this time in rail cars to the mining site. There we climbed up to a higher level which was an enlarged space. Our animated and enthusiastic tour guide explained the mining process and how they got the ore back to the surface. To demonstrate the conditions under which the miners worked, he turned out all the lights. We were plunged into true darkness, and when he lit a single candle it was surprising how much light it shed. Yet it was hard to believe that was all the light they had to work by, years ago. 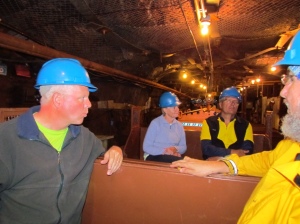 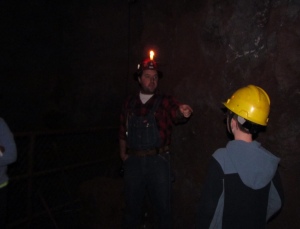 We managed to fit our remaining miles to the hotel perfectly into a sunny window. No sooner had we arrived than the rain came down in sheets that came in waves across the parking lot. Looking out on it from a dry hotel room was very satisfying. 49 miles completed, successfully dodging the worst of the rain.