In the last two days we have cycled in three different states. Yes, we upped our our daily mileage to about 70 miles, but mainly it wasn't far across Idaho to fill the gap between Montana and Washington.

Continuing along the Clark Fork River, we cycled a long span with little in the way of civilization. We also experienced our first clouds of the trip, which prolonged the morning warm-up. Our breakfast turned out to be a moveable feast, as we cobbled together findings from a little general store – complete with old hardwood floors and low shelves – to a modern convenience store. I quickly shed my coffeehouse snobbery to down some machine-made mocha, which was heavenly for its sweet warming effect. Apart from that, we greatly enjoyed the lack of traffic and the unspoiled beauty along that stretching the river.

We also met a young man who had spent the morning picking wild huckleberries up in the mountains. We'd never had them before this trip, but had quickly figured out that they were a local delicacy. In fact, we've already sampled huckleberry ice cream, vinaigrette and ice drink. So we were intrigued when he took us out to his truck to show us the buckets of berries he'd picked, and the long pronged contraptions he used to colllect them from the bushes.

Crossing over into Idaho, the river eventually emptied into Lake Pend Oreille. The road skirted the edge of the extensive lake, making for a scenic ride. Although the clouds kept us from getting too warm while cycling, we did wish for the return of blue skies to show the lake off to better advantage. 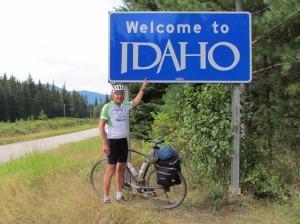 Stopping for the night in Sandpoint, we were hosted by a wonderful Warm Showers family that immediately enveloped us with their multigenerational family members and made us feel so very welcome. The kids eagerly showed us their egg-laying chickens, gave us a tour of the yard, and introduced us to their old cat Peanutbutter. We set off this morning among the familiar flurry of making school lunches and getting kids off to class.

We happily followed the Pend Oreille River out of Sandpoint, but once over the border into Washington, we left the river and headed toward Spokane. Despite riding through beautiful pine woods much like home, the traffic increased and it felt too much like just working to get from Point A to Point B. We did take a brief detour through a county park, which was a nice interlude. On the bright side, it was easy going with more downhills than up and the wind mostly behind us. So we have few complaints.

We won't be adding another state for a while, as it will take us a while to make our way through Washington. But in case you're wondering, next up is Oregon.