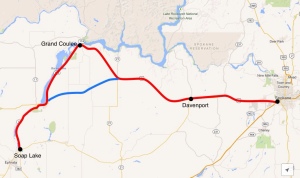 If not for the advice from a cyclist on Crazy Guy on a Bike (a portal for journals of touring cyclists), we would have missed it entirely. Our planned route had us continuing straight on highway 2. But taking the shortest distance between two points is not necessarily the best choice. And that was most certainly true in this case.

Angling up to the Grand Coulee Dam instead allowed us to travel through the area below the dam which is an ancient riverbed, now home to several lakes. Called the “Grand Coulee,” it stretches for about 60 miles and is a feast for the eyes, particularly on a bicycle.

It is an extremely arid area, with less than 12 inches of rainfall a year. Huge basalt cliffs border the lakes and form an impressive landscape. One rock named Steamboat Rock, is definitely a standout. Particularly on the upper end, the road clings to the base of the cliffs and we rode in the shadows of their huge height. At times the road cut through the rocky formations, and sometimes we rode up and over the lower ones. 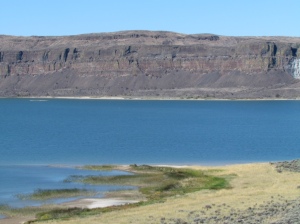 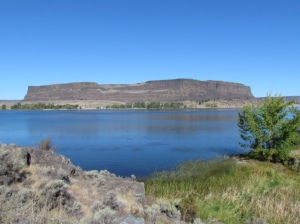 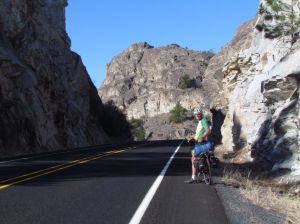 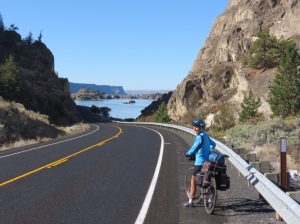 Dry Falls bisects the Grand Coulee. Stopping at the roadside overlook, we were amazed to see the sight of what was once the world's largest waterfall. We were only a few thousand years too late to see it, as it was wiped out by the Ice Age floods that swept through the area, leaving it high and dry. But it was still a captivating sight, especially as we tried to imagine it in its former glory. 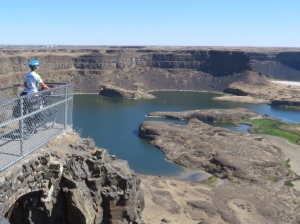 The basin broadened out below that, but was still dominated by the other-worldly cliff structures that were so prevalent. It didn't hurt that we had yet another cloudless blue sky to reflect off the lake waters and fill the day with sunshine. 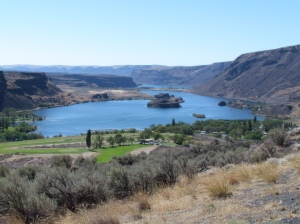 The Grand Coulee ends at Soap Lake, which is actually a natural salt water pool and contains 23 different minerals. We didn't bathe in its healing waters, but we did settle into a unique lodge on its shore to enjoy the view and savor the day's ride. We are most grateful for the good advice. In fact, I'd say this cycling and scenery was my favorite of the trip so far. The detour was worth every extra mile.